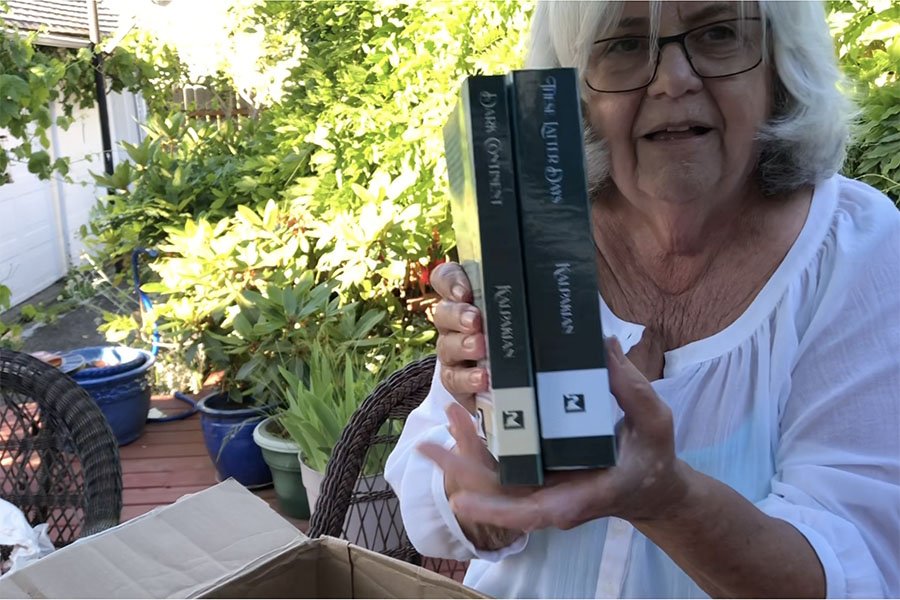 The contents of this box feel like something akin to the biblical In the Beginning was the Word.

In the life of every author certain days shine, never-to-be-forgotten moments, leaving the author speechless, or misty, or perhaps even sobbing with joy: the day the book is first accepted for publication, arrival of the advance money, arrival of the first reading copy (the ARC) to hold in one’s hand… and then, surpassing all else: the book itself. Author’s copies. This day is its own celebration, UnBoxing Day as it has come to be known.

The books come in a box like any ordinary package, but for the author, the contents of this box feel like something akin to the biblical In the Beginning was the Word. Here, in hand, words-between-covers are the ideas and emotions that roiled in the author’s head. Now made tangible. Those feelings and emotions and thoughts have been transformed into an object. They now have a physical life beyond the author. To hold that book in one’s hands means that those ideas, emotions—for a fiction writer, characters—will move  out of their creator’s heart and mind, and more importantly, into the hands, and one hopes, into hearts and minds of readers, distant people unknown to the author.

My books all look like foster children, a bunch of unrelated entities who happen to be on the same shelf. 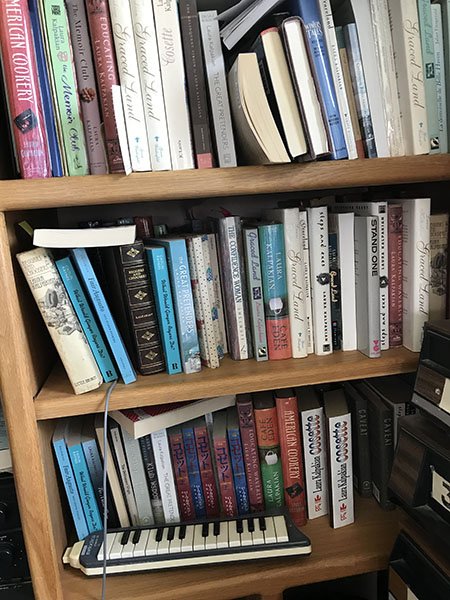 This week Paint Creek Press endowed me with that indescribably wonderful feeling with the arrival of the first two of reissues of my work: the second collection of stories, Dark Continent (1989) and These Latter Days (1985) the seminal novel that first took me to St. Elmo California and introduced me to characters (and their descendants) who would populate my work for decades. They are now uniform trade paperbacks. This means that anyone can look at them on a shelf and know instantly that these books are related: they come from the same mind, the same hand; the design tells you, visibly, they are the creation of one author.

Before now my books, placed together still look random, like foster children,  a bunch of unrelated entities who are happen to be placed together.  Few of them have had the same publisher, their dust jackets and jacket are all motley, not at all cohesive.

Even if These Latter Days is not my all-time favorite among my books, it’s certainly the most important.

These Latter Days, my second novel began its life in the mid 1970’s as a long story, the result of one of those ideas, a what-if that often occurs to fiction writers.  Miss Kitty Tindall, a 1911 Liverpool working class lass, lives with a drunken mother and a heavy-handed stepfather. Literacy allows the shallow, irreverent Kitty to feed her imagination with dashing heroes, lovelorn heroines, and grandiose dreams of singing in the music halls.  One day on her way to work, she happens on a Mormon tract left by missionaries.  Smitten with the drama implicit there, Kitty converts to the church. Mulling on this character I asked myself: for such a girl (burgeoning sexuality, no particular allegiance to the truth) what might ensue? I have never published this long story because Kitty immigrated to Salt Lake, and married Gideon Douglass, and once Gideon’s mother, the steely Ruth Douglass strode into the narrative, she insisted this was her story. Even before I knew it was a novel, she insisted it was hers.

Ruth fought me for years until I began to feel myself to be her servant rather than her creator. Ruth won this struggle because unlike Kitty she is strong enough to maintain a long, complicated novel. She can support a story that tests her courage at every turn, including domestic violence, religious delusion and raising six children on her own while she is tethered to the truth by lies. Kitty is a mere secondary character, her Liverpool backstory distilled into one paragraph.

Another writer might have tucked this difficult book away and moved on, but I was stubbornly set on finding print. Committed to it

My editor at Little, Brown who enthusiastically published my first novel, rejected the version of TLD that I sent him in 1978. He said he’d like to see it again if I cut it by half.   I cut it by half, but in 1979 he died suddenly. The editor to whom I was assigned had no interest in it at all. One agent retired without a replacement; another agent gave up on offering the book. The novel and I were on our own. Another writer might have tucked this difficult book away and moved on, but I was stubbornly set on finding print. Committed to it. Over the next few years, and in addition to much else, I returned to revise, over and over, finishing finally in early 1982 at the Montalvo Center for the Arts in Saratoga, California.

At last—and through a series of coincidences that defy fiction—I found a publisher in Times Books (as in New York Times) who brought out the hardcover in 1985. TLD was the only novel they ever published. The following year it appeared as a mass market paperback and in hardcover and paperback in England. Then in 1998 when John F. Blair Publishing published the hardcover Caveat, they reprinted TLD as a companion trade paperback. A few years later, alas, I found TLD in a used bookstore on the floor. I dusted it off and put it back on the shelf beside the rest of the motley Kalpakian crew.

Even if These Latter Days is not my all-time favorite among my books, it’s certainly the most important; the place and the characters root many novels, and countless stories that emerged from my imagination over decades, including most of the stories in Dark Continent. And now the two sit side by side on a brand new shelf just cleared to make room for them, and the other, handsome Paint Creek Press reprints that will follow within a year. 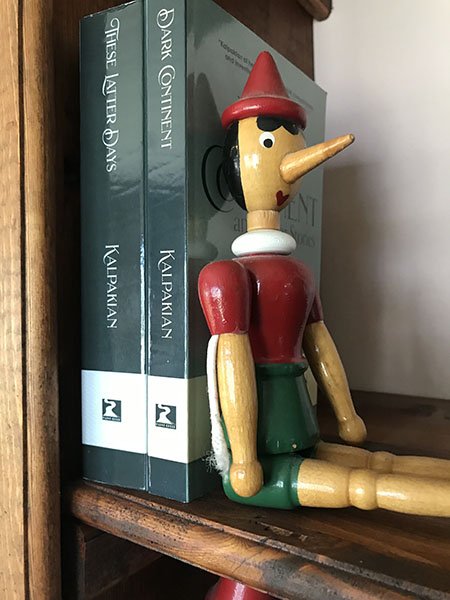