Trumbo: The Blacklist portrayed in film

You can see Trumbo at the Pickford--one night only--May 2nd at 6 PM. I will introduce the film and talk about its connections to my novel. Your ticket also entitles you to a glass of champagne in a nod to old Hollywood glamour. Hope to see you there. 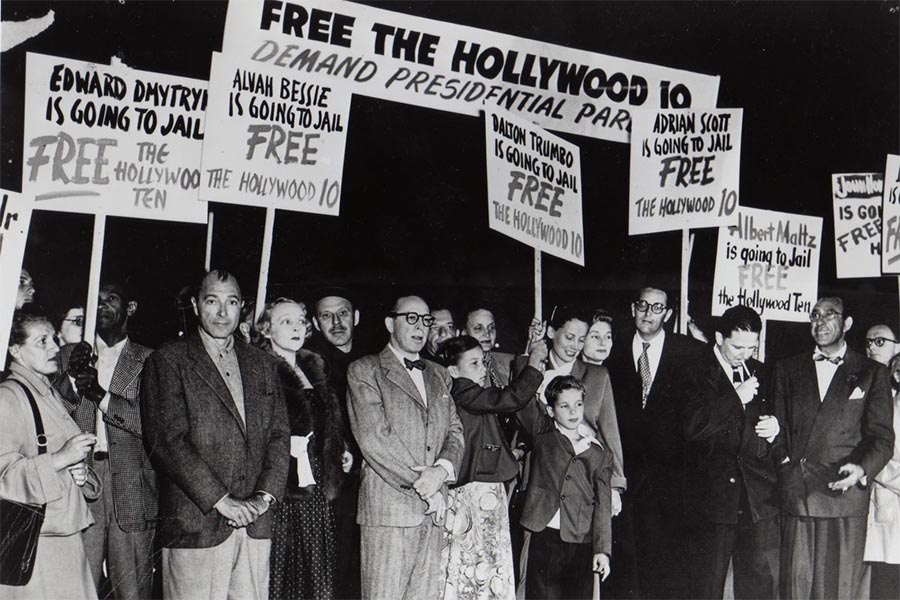 Join me, for a showing of Trumbo! May 2nd at 6 PM. I will introduce the film and talk about its connections to my novel, The Great Pretenders. Your ticket also entitles you to a glass of champagne in a nod to old Hollywood glamour. Hope to see you there.

Of the films that deal explicitly with the blacklist, Trumbo (2015) is the most successful. Dalton Trumbo, famous for his acerbic wit and fearlessness, was at his peak, the highest paid writer in Hollywood in 1947. He was certainly the most famous of the Hollywood Ten, writers and directors who were called to testify before Congress that year to answer if they were, or had they ever been Communists. They refused (often with witty repartee; they were writers, after all) basing their actions on the First Amendment, that is, on the belief that Congress had no right to inquire into their political lives, much less their comrades. They were held in contempt. For three years (and astronomical legal fees) they lost their appeals in higher courts. Finally, the Supreme Court refused to hear their case at all, thus all their convictions stood. In 1950 they went to federal prisons.

Bryan Cranston was deservedly nominated for Best Actor Oscar and a Golden Globe in the title role. His is a powerful, compelling performance. Helen Mirren’s performance as the asp-in-a-hat Hedda Hopper also garnered a lot of praise. John Goodman’s has terrific fun with his role as the sleazeball producer of a schlocky Poverty Row studio. And yet the 2015 film–which will play at the Pickford Film Center May 2nd at 6 pm–did not fare especially well critically or commercially. To my eye, the difficulty with the film is that TRUMBO shifts direction about half way through, steps away from the complexity inherent in the events, and becomes instead about the difficult adjustments obliged of the Trumbo family as they navigate his post-prison life. It becomes, in effect, a father/daughter story.

In making a historical film (or writing a historical novel) the audience has to know what’s at stake. Context must be created scenically and dramatically. In the case of the blacklist era as it reverberated through the entertainment industry, that challenge is daunting. Film as an art form is allied, even shackled to the sequential: this happens, that follows. Film loves chronology. Backstory is hard to portray. However, the roots of the blacklist, of McCarthyism in general, reached back twenty years to complicated events in the Depression, the Spanish Civil War, and during the Second World War. Context for these complexities is not solved when, in TRUMBO, Dalton’s little daughter asks “Daddy, are you a Communist?” He replies with the metaphor something on the order of a peanut butter sandwich. Fine for a ten year old girl, but surely the audience deserves something more sophisticated.

In Arlen Hird (played by Louis C. K. ) the filmmakers created a composite individual whose pathos and fate are clearly meant to stand in for the lives of many. And yet, once this character is sadly dispatched, you wonder why he was in the film at all. His plight never quite ignites the meaning it is supposed to have. His fate does not resonate with sadness or with the other characters after he’s gone.

Post-prison, unable to work under his own name, Dalton Trumbo (1905–1976) took on all sorts of projects under other names, including the ignominy of writing for “Poverty Row,” small studios that churned out nonstop schlock, and throwing words into the ever-hungry maw of television. The relentless demands of this kind of work (ill-paid, heavily stressed) are vividly portrayed. We watch, cheering, when using a friend, Ian McLellan Hunter, as a front, Trumbo’s script for the (still lovely) Roman Holiday wins the Oscar for Best Writing in 1954. And then again, in 1957, another Oscar for The Brave One written under the pseudonym Robert Rich.

The film paints the actor Kirk Douglas in a heroic role in trying to get his famous picture Spartacus (1960) made, insisting that Dalton Trumbo write it, and put his name on it. The rapturous reception of Spartacus marks a convenient end to the Blacklist era, though not to the end of its destructions and the controversies which go on to this day. Thus, it was odd to me that the film ends with a public moment near the end of Trumbo’s life when he famously said there were no heroes or villains in the blacklist era, only victims. The family all stand and applaud, looking dewy and joyous. This assessment was wildly controversial in 1976. It’s an assertion that many would still dispute. Me among them.

I was writing The Great Pretenders in the fall of 2015 when Trumbo came out. I was mad to see it, but it had somehow fizzled even before release, and despite its all star cast, it did not show on any screens in Bellingham. The Pickford Film Center is going to rectify that. You can see it at the Pickford–one night only–May 2nd at 6 PM. I will introduce the film and talk about its connections to my novel. Your ticket also entitles you to a glass of champagne in a nod to old Hollywood glamour. Hope to see you there.