The Club, above all, expands on the famous Samuel Johnson quip: “He who is tired of London, is tired of life!” The thump and bustle of 18th century London throbs in these pages. 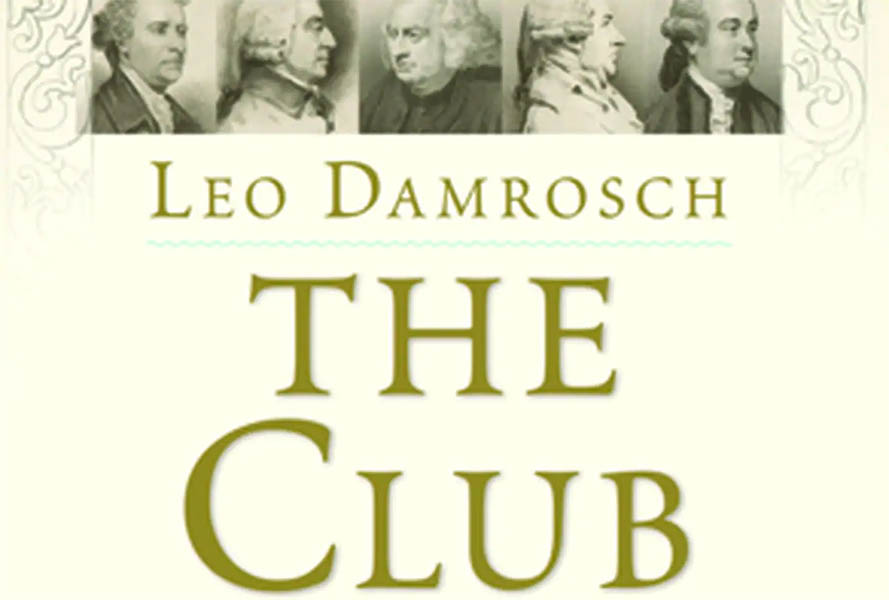 Pity the poor biographers! They become psychic roommates with their subjects, giving up years to submerge their own lives in writing and research so they can render informed judgments supported by footnotes. When they finish the whole thing (I have heard biographers say) they sometimes feel they have squandered not just time, but love. Just as you might with an all-consuming love affair when you slowly realize the Beloved really isn’t worthy of your affections.

How much more demanding, then—and more perilous—is the Collective Biography, the book that seeks not simply to re-create one life, but a dozen lives, their textures and connections, the world in which they fought and flourished. Such is Leo Damrosch’s The Club, now a Yale University Press paperback.

The Club, above all, expands on the famous Samuel Johnson quip: He who is tired of London, is tired of life! Leo Damrosch is certainly not tired of London. The book is generously illustrated and Damrosch’s effortless prose makes the reader feel truly present, not just around the Turk’s Head tavern table, but amid the thump and bustle of the 18th century.

Whatever else he did in his eager, vain and variegated life, James Boswell wrote The Life of Samuel Johnson.

The core of the Club were London wits, writers, artists, thinkers, actors, painters, politicians and philosophers, Samuel Johnson, James Boswell, David Garrick, Joshua Reynolds, Richard Brinsley Sheridan, Edmund Burke, and many lesser lights (all of them briefly, brightly illuminated). The Club began meeting in 1764, the mid-century heyday of Tom Jones and Henry Fielding, and continued for decades, well into the Age of Revolution. Their lively rounds of conversation, debate, drinking, eating, quarreling and quibbling were sometimes chronicled by the indefatigable note-taker, James Boswell. But the book expands well beyond the Turk’s Head tavern.

Each extraordinary member of The Club is introduced with vivid surrounding context. I have a special weakness for theatre, so my favorites were the actor, David Garrick, and the playwright Richard Brinsley Sheridan. Any actor who strutted his hour on the stage in the eons before recorded sound necessarily vanishes without evidence of their art. But in these pages, even if we can’t actually hear David Garrick, Damrosch tells us the effect that Garrick’s voice, his mannerisms, his gifts had on others. Imaginatively speaking, he recreates what it was to be in that audience, to be in the wings, to be on the 18th century stage itself.

Readers of The Club should be warned, however, that the book has side effects.

Though the Club never admitted women, Damrosch does not neglect them. The hostess, Hester Thrale Piozzi and the author Fanny Burney, their insights, and relationships are lively and present.

Readers of The Club should be warned, however, that the book has side effects. (Like those television commercials for drugs where they rattle off quickly the nastiness that can befall you, and then soothingly advise you to tell your doctor you want the drug anyway.) The side effect for me was that I wanted to know more about many of these people, especially the women. I am now looking for good biographies of Hester Thrale and Fanny Burney.

Hester Thrale and her first husband, a wealthy, progressive brewer, hosted many of these Club men as guests at their beautiful home at Streatham Place, not just for tea parties, but sometimes for weeks or months. Hester’s contribution to the life of Samuel Johnson cannot be overestimated. In addition to her hospitality, and creature comforts, she gave the brooding, melancholic, childless old man the sort of affection and support that a daughter could give.

But Hester was not all tea and sympathy. Widowed while still in her forties, she married her children’s music teacher, Signor Piozzi. This headstrong act created a shitstorm (not Leo Damrosch’s word). Not only did her entire social set lash out, turn their backs on her, but her children did as well. Samuel Johnson’s dismissal was particularly cruel. But from what we know, the marriage was a happy one, and so perhaps the world was well lost for love.

Hester Thrale gave the brooding, melancholic, childless Johnson the sort of affection and support that a daughter could give.

For all the lively individuals who fill these pages (including Samuel Johnson’s wonderfully eccentric household) Samuel Johnson and James Boswell dominate. It begins and ends with Boswell. The vainglorious Boswell preens, and prances, whines and whores his way through London and the Continent; he is unfaithful to his wife, but he is never disloyal to Samuel Johnson. He sought from Samuel Johnson the paternal approval he never received from his own stern Scottish father, Alexander, Laird of Auchinleck.

If Hester Thrale gave Samuel Johnson the comforts of admiring daughter, Samuel Johnson gave James Boswell the ballast of good (though not uncritical) father. In some ways, these three were a sort of quarreling family. Certainly they enriched one another’s lives. Both the “son” and the “daughter” served Johnson with written chronicles of his life for which the world is grateful. Hester wrote a biography of Samuel Johnson that in its era rivaled Boswell’s masterpiece.

James Boswell, as a human being, will not endear himself to feminist readers, nor probably to masculine readers either.

James Boswell as a human being will not endear himself to feminist readers, nor probably masculine readers either. Leo Damrosch, however, clearly has affection for Boswell. (My own lifelong affection for Boswell would require a separate Random Reader to recount.) Damrosch’s chapter on Johnson and Boswell’s tour of the remote Hebrides in Scotland offers readers the many pleasures of the journey without the perils. The reader feels the excruciating tension when Samuel Johnson met Alexander, Laird of Auchinleck at Boswell’s ancestral home. Boswell’s father died in 1782, and he inherited the title, though his later years were not happy ones.

Whatever else he did in his eager, vain and variegated life, Boswell wrote The Life of Samuel Johnson. As a biographer he did give years of his life to his subject, though not in culling through dusty archives. For Boswell and Johnson those years were the liveliest, the most fulfilling, the most adventurous of their lives. We are all the richer for their friendship. We are all the richer for Leo Damrosch’s collective biography, The Club.