The Adventures of Robin Hood

Robin stole from the rich, despised the greedy plutocrats, and in acts of social justice, gave to the poor, the hungry. As a child in Southern California, I knew nothing of class struggle, but I was all on the side of Robin and his Merry Men. 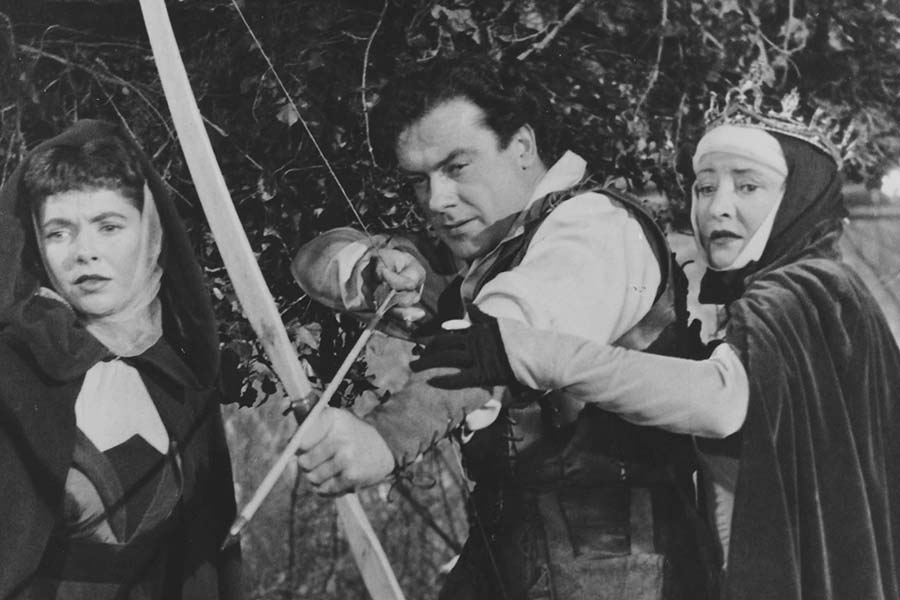 Robin stole from the rich,  despised the greedy plutocrats, and in acts of social justice, gave to the poor, the hungry. As a child in Southern California, I knew nothing of class struggle, but I was all on the side of Robin and his Merry Men.

In the early 1950’s my parents bought their first house.  They financed it with the GI Bill, and the mortgage was $55 a month. Our neighborhood was but one of many tracts that sprang up all over post war San Fernando Valley: six long blocks parallel to one another, lined with homes, two styles and three colors to choose from (green stucco, gray stucco, or a sickly peach stucco). Before each house, on the strip of dirt between the street and the sidewalk (referred to as the parkway) little elms were staked. No lawns or gardens, nothing but dirt when we moved in.  The tract was bracketed at one end by an alfalfa field, and at the other by a defunct pear orchard and the remains of a chicken ranch. Within a few years all that was gone too, and there were more tract houses. I have no recollection whatever of the bulldozers, the dust and racket all that construction must surely have raised. I remember only lovely, hot summers, reading and playing imaginary games in the backyard, roller skating, riding bikes and watching television.

We had a television before 1952 when my sister, Helen, was born.  A squat box, it sat on four stumpy legs, and for a time had  little rabbit ears antenna. Three networks and three local LA stations played across the screen. Up and down Beckford Avenue on summer nights, laugh tracks in unison spilled from the open doors, and families sat rapt, their faces bathed in flickering gray light.

My postwar generation was the first to have television influence much of our lives. The radio might play in the kitchen while you were doing something else, but people sat down purposely to watch television. Television gave shape to our childhood days, from preschool Sheriff John and the Lunch Brigade, to afternoon kiddie cartoon shows with  Popeye and Betty Boop and Felix the Cat from the 1920’s and ‘30’s (thus, unknowingly, introducing us to our parents’ cultural diet ) the puppet shows, Beanie and Cecil, and Thunderbolt the Wonder Colt. A little later came the Mickey Mouse Club and  American Bandstand (where, shock! there were black teens as well as white!!)

But among these kiddie shows, my favorite by far was  The Adventures of Robin Hood.  Made, financed, and distributed by the British, the series ran for four seasons and the cast included names that would become stellar in British film and theatre. Interiors were filmed at Nettlefold Studios, exteriors at Foxwarren Park, an estate in Surrey owned by the producer, Hannah Weinstein.

However, Hannah was an American who had fled New York during the McCarthy era. She chose her writers from a great pool of exiled American talent. Writers who had once commanded glamourous salaries and lounged by Hollywood pools, had fled to England when faced with the prospects of  prison, or being unable to work at all.  Some of these writers like Adrian Scott (Crossfire, 1943 and Mr. Lucky, 1940, one of the original Hollywood Ten)  had already served time in prison before coming England. These left-wing writers must have had a great time (if not great pay) writing  The Adventures of Robin Hood.  After all, Sir Robin is born to the manor, but prefers the forest and the company of comrades.  Robin stole from the rich,  despised the greedy plutocrats, and in acts of social justice, gave to the poor, the hungry. As a child in Southern California, I knew nothing class struggle, but I was all on the side of Robin and his Merry Men.

In  the 1991 film Guilty by Suspicion, Robert deNiro plays a blacklisted director, a man once powerful, who flees to England when he is branded as a Commie in the 1950’s. He ends up working on an unnamed kiddie TV program set in the middle ages and filmed at a castle.

Far from the castles of England,  I reveled in this series. I never missed an episode. For my birthday my parents got me a toy bow-and-arrow set (arrows with suction cups on the end) and a target they pinned to the backyard fence my dad built.  I would practice archery, usually wearing green. But I had no idea that dialogue on the lips of Robin, Marian, Friar Tuck, Little John and others came from the pens of Adrian Scott, Waldo Salt (later, Midnight Cowboy, 1969 and Coming Home, Serpico) Ring Lardner Jr. (Woman of the Year, and later M*A*S*H* 1970) Howard Koch (Letter to an Unknown Woman, 1948 and contributed to Casablanca). Their lines appeared, but their names did not. Had these names been in the credits, The Adventures of Robin Hood would have never got US distribution. They used pseudonyms, or on some episodes, they just left off the writers’ credit altogether.

The Adventures of Robin Hood is my only connection to writers whose stories I used in creating The Great Pretenders, but the series lives on my memory as stirring television. The theme song too remains indelible:

I, personally, can still sing this theme song. I won’t, but I can.