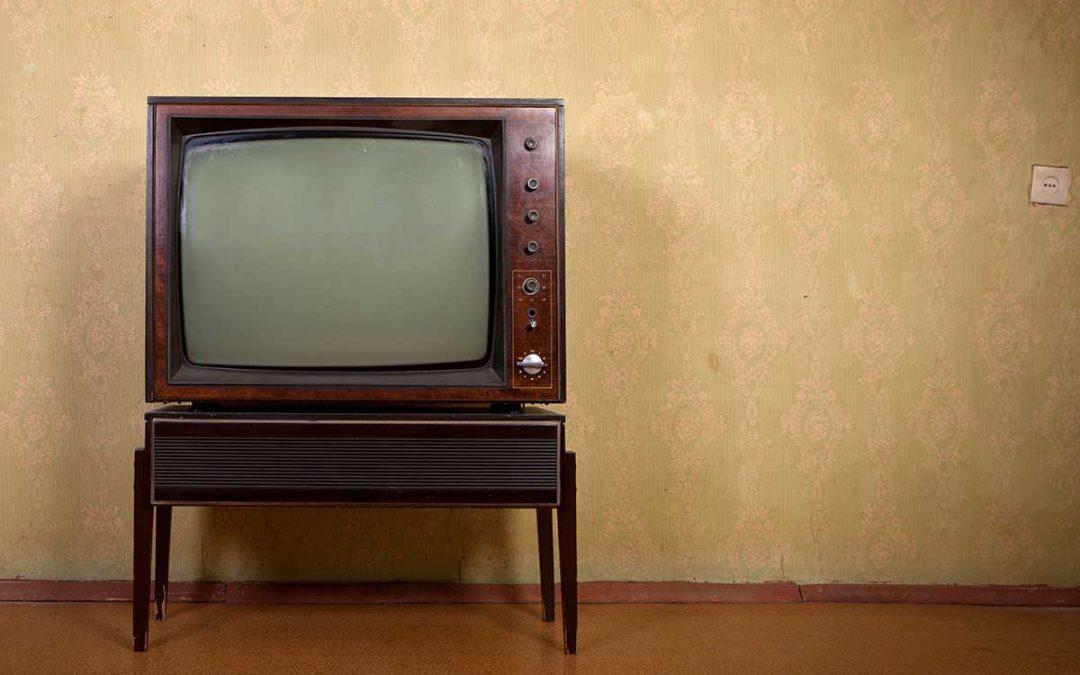 “Television, gentlemen, is the great, roaring beast in the basement of the entertainment industry. You just kept throwing chunks of meat at it, and it roars the louder, and wants more.”

In 1949 my father, mother and I, a pre-schooler, moved to Great Falls, Montana where my father had got a job in public health. My mother, who had lived in LA all her life, was miserable and suffered terribly from the cold.Luckily, the job did not last very long, and in December 1950, we drove back to California via Arizona. My mother has a vivid recollection of that trip.Rolling down the window as they crossed into California, and as the warm air was pouring through the car, she turned to my father and asked, “What are all those things sticking up from roofs of houses?”

Television antennas. There was no television in Montana. They didn’t recognize the TV antenna for the ubiquitous thing it had become in a year and a half.

Television did not spring full-blown in the early 1950’s like Venus on the half-shell. My mother has another memory: as a thirteen year old in 1935 going with a friend to where the friend’s dad worked to see some remarkable new invention. She can’t recall what the father did, or where they went (somewhere in LA) but does she does vividly remember men in suits staring at a tiny little box, awed by what we would later call “snow.”

Television is an important part of my novel, The Great Pretenders. Doing the research,I was astonished to find that the first talkie of Cyrano de Bergerac was actually made for British television in 1938. War in Europe began in ‘39, and development of the new medium had to wait till that conflagration came to a close. However, by1947, certainly in America, television had already wrought change. By the time my novel opens–1953–television was a force that the picture business had to reckon with.

To meet this challenge many of the biggest studios developed new camera and projection techniques. Panavision! VistaVision! Cinerama! Todd-AO! all gave audiences a theatrical experience they couldn’t possibly have sitting on their couches at home in front of a box. Studios also went in for vast spectacle movies, often biblical motifs, culminating in 1959’s The Ten Commandments with the parting of the Red Sea on film. (Or, if you prefer, culminating with Cleopatra in 1963 that almost bankrupted 20th Century Fox.)

None of this was sufficient to fend off television’s tsunami assault on the entertainment business. Television enlisted a not always certain alliance of technology, corporate shock, even some creativity, and perhaps most importantly audience. Television brought about a new kind of audience:consumers. Corporate advertisers now had a huge stake in entertainment.

None of the studios surpassed Disney in learning to use television to their advantage. In creating Walt Disney’s Disneyland for television, Disney Studios effectively connected their theme park, films, and TV specials under a single umbrella. Sunday nights audiences lined up on their couches to be, as it were, spoon fed. As part of the generation raised on all that fare, I too, had my Davy Crockett coonskin cap. I too still remember the theme song. In fact, I can still sing the theme song for (long-vanished) Ipana toothpaste who sponsored the Mickey Mouse Club. The magic kingdom prevailed.

In The Great Pretenders, two studio execs at 1955 gala party have this exchange:

“I hate it, when my kids go around singing Davy Crockett, King of the Wild Frontier,” Gordon grumbled, “Who would have ever dreamed some old frontier tale would make that much money? Look at what Disney’s done just in coonskin caps! Three million annually!”

Roxanne Granville, a young, independent agent representing writers, responds, “My perspective is different. I quite love television.Sure, the pay is poor, the prestige is nil and the hours brutal, but on behalf of my young, ambitious writers, I am grateful to television. Television, gentlemen, is the great, roaring beast in the basement of the entertainment industry. You just kept throwing chunks of meat at it, and it roars the louder, and wants more.”

In some ways the entertainment industry faces this same challenge today with the advent of Netflix, Amazon, You Tube, Hulu, and now Apple creating original content for film and streaming. These entities have changed the means of entertainment distribution, and in doing so, changed the nature of how and what we imbibe as entertainment.Oddly, Marshall McLuhan said it best in 1968: “The medium is the message.” Emphasis mine.