“A History of the World from the Time of Adam to the Close of the Apostles’ Time,” 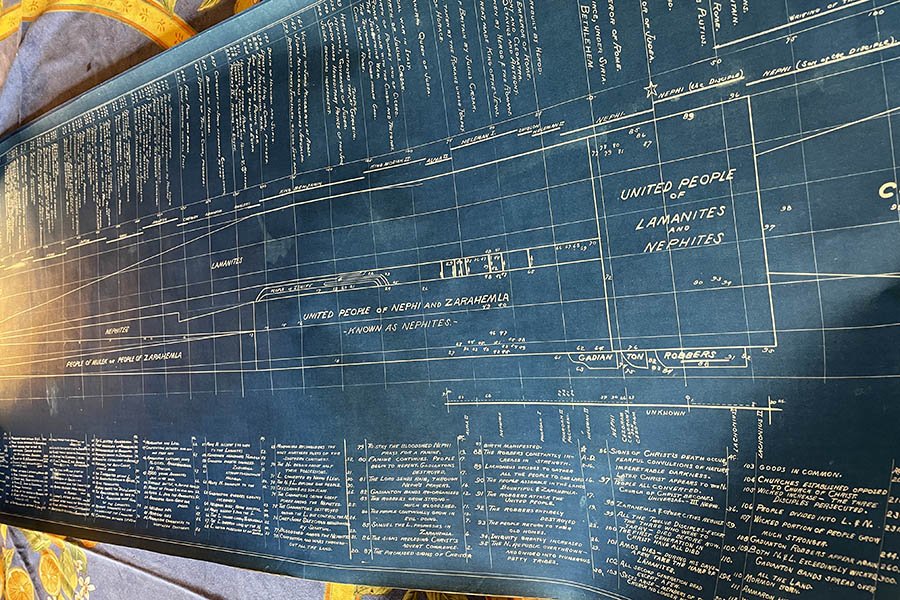 Some ten years ago when Biblical-style rains pelted Western Washington, our basement flooded. In the yucky aftermath, I was obliged to wade through my family’s past which had been deposited there after my parents sold their house.  Everything salvageable—boxes and bags of largely unmarked Whatever—I moved to the second floor, filling up a space that had once served as a toy room for my sons. Untouched ever since. 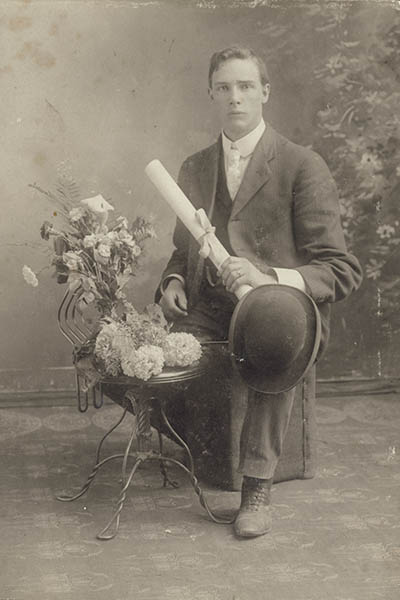 Then, last month, flailing through this stuff on an unrelated mission, I came, to my surprise, upon a box of photographs and memorabilia from my father’s family. I was especially happy to find again the photo of my Mormon grandfather, Will Johnson, posing in 1908, for his graduation from Ricks Academy in Rexburg, Idaho.

Founded in 1887 as a school for Latter-day Saint children, Ricks Academy later became Ricks College, offering Associate degrees. Will Johnson went there at the age of nineteen in 1906 because an uncle by marriage, Howard Hale, had become a new faculty member. Howard Hale prevailed upon Will’s parents to let him leave the farm and accompany him to Ricks for an education. Probably they let Will go because he was the eldest of five sons, and the other four could still work the farm.   A family photo taken in front of their brick house in 1899, when Will was twelve, shows everyone in ragged, holey, half-patched clothes.

The young man in this studio photo, by contrast, is wearing a suit, a vest, a tie, a stiff collar and stiff cuffs. He has been posed beside artfully arranged flowers. He is a serious, unsmiling young man, his expression a mix of trepidation and pride.  A bowler hat is perched upon his knee, as though immediately following this session, he will put the hat on, and dash out into the great world.

This inscription, signed by Will’s brother George, shed a whole new light on my estimation of my grandfather.  Before this moment I thought Will Johnson had faked graduation, in short, lied about it.

In this assessment I was hasty, and probably ungenerous.

I thought this because some years ago, readying a retrospective for my dad’s 90th birthday, I wrote to Ricks’ alumni office, and inquired after my grandfather as well. They had no record of William A. Johnson whatever. (They did have records of Howard Hale as a faculty member.) Ah, I thought at the time: Will Johnson had this picture taken to suggest graduation rather than document it. I repeated this judgment in the Johnson chapter of The Unruly Past: Memoirs (2021). In this assessment I was hasty, and probably ungenerous. Because Will had gone to Ricks at age nineteen, I assumed he must surely have already got beyond the eighth grade. I was wrong. He was twenty-one, a grown man, before he accomplished what he ought to have done by fourteen.

In the photograph there’s a tension in the way he holds the rolled-up, ribbon-tied diploma, as if he might use it to slash a path through the world, but none of Will Johnson’s many occupations were lucrative.  He married in 1914, and over the years he taught in one room schools, he homesteaded, he dry-farmed; he worked in the sugar beet factory, and as a carpenter, house painter, mechanic. The family lived in hardscrabble, dismal poverty in Fremont County, Idaho. Later he, his wife and five children moved to Coeur d’Alene where, among other things, he taught naturalization classes for immigrants. At the end of his life in 1956 Will was a draftsman at Hill Field near Ogden, Utah. Where had he acquired drafting skills? Not from any school. He had taught himself through an endeavor that absorbed his whole adult life.

Will began this work in 1906 when he hadn’t even finished the eighth grade.

Will Johnson was a devout Mormon; the very core of his being was rooted in the church which he served in many capacities. But his most ambitious endeavor on behalf of his faith was “A History of the World from the Time of Adam to the Close of the Apostles’ Time,” a Great Timetable reconciling  Biblical history, secular history and the history portrayed in the Book of Mormon. According to Howard Hale’s fulsome eulogy at his funeral, Will began this work at Ricks in 1906 when he hadn’t even finished the eighth grade. 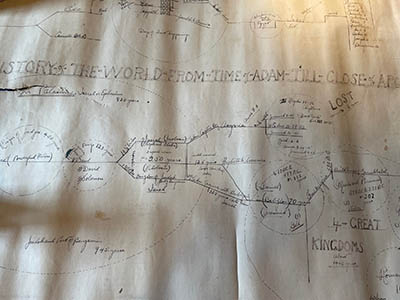 Over decades, on long, furled painstaking blueprint charts and hand-drawn maps, he aligned these corresponding events, each year calibrated to a fraction of an inch. He drew a large, fanciful depiction of the woman mentioned in Revelations 12, the one with the sun and the moon under her feet, the one beset by dragons.  The mind boggles at the research that went into this enterprise, to say nothing of the attention to detail. One slip of the pen, and he had to start anew—something that happened often because at his death in 1956 there were many such charts rolled up and stored in long cardboard tubes. These tubes came to my dad.

Last month, having found the graduation picture, I poked among the boxes and bags in the former toy room, and found them.  I took them downstairs, opened the tubes, unrolling the charts for the first time since 1978 when my dad had let me take them as research for These Latter Days.

I marveled at the precision, the ambition, the dedication.

Some tubes contained several versions, each six or eight or ten feet long, mostly white ink on blue paper. A very few were dated, 1945, 1950, none designated as the final. I marveled all over again at the precision, at the ambition, at the dedication that informed this whole undertaking. Unrolling these Great Timetables on which he so labored, re-assessing his life, I was moved to fresh respect for Will Johnson.

When I die what will happen to these Great Timetables?

I am older now than Will was when he died. Old enough, certainly to recognize a lifetime’s commitment to creating and expressing one’s deeply held convictions.  I asked myself: when I die what will happen to these Great Timetables? None of my family has any connection with the Mormon church, nor any contact with whatever is left of the huge Johnson clan. In the back of my mind, I kept hearing Orson Welles’ breathy “Rosebud” as the sled was flung into the fiery furnace. The older I get, the more poignant is that moment.

Ricks College is now BYU-Idaho.  I wrote to the Special Collections librarian there with backgrounds on the Great Timetables, and the fifty years of labor they represented. I offered to donate them to the place that had first inspired Will. To my delight, the librarian replied that they would happily accept.

In truth, I had no special affection, or even much recollection of Will Johnson, but in sending his work to BYU-Idaho’s library, I felt a flush of gratitude toward him. Perhaps from him I inherited the perseverance to pursue an evolving work for decades. I was glad I could honor his commitment and his memory, and redeem, in some way, those long, no doubt lonely hours he poured over these rippling blue sheets of carefully calibrated time.