Perhaps this moment, now, when all our lives are sequestered, made small, compact, cloistered, perhaps this is the moment to return to Barbara Pym: savor your small pleasures. 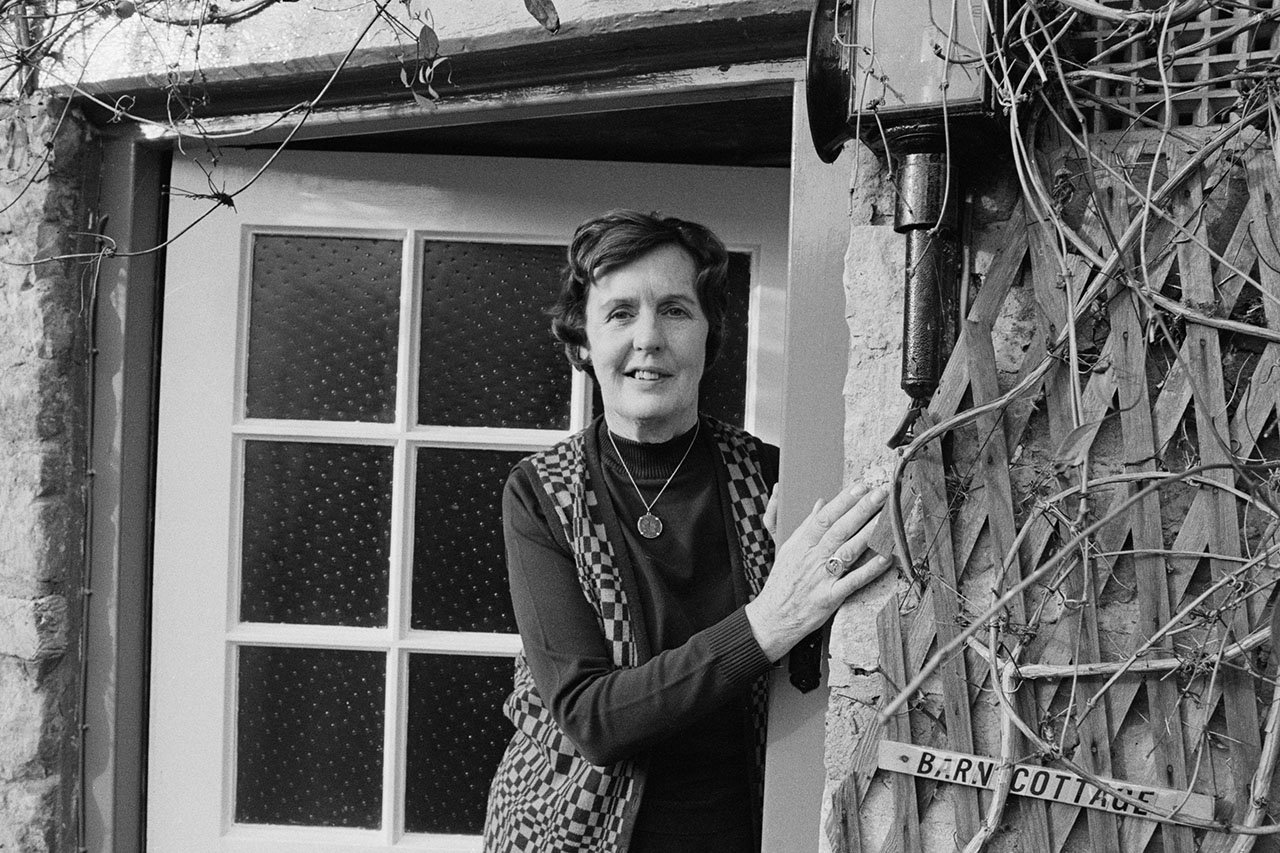 In the 1980’s I spent a lot of time in England where I ran full-tilt, one might say, into books published by Virago Press. Virago, an upstart publisher, made a recent splash with their commitment to women writers, past and present. And what a lot of past there was! So many women writers had vanished not just from the canon, but vanished altogether, their names and books—until Virago started reprinting—lying under a caul of thick obscurity. To come upon these uniform dark green paperbacks with their arresting portraiture, was to be in heaven. I bought them by the armful and shipped home what I could not pack.

At the time I was struck by the parallels in the careers of Barbara Pym, Jean Rhys, and Molly Keane (M. J. Farrell) British authors who had lively, promising starts to their careers, and ….vanished. They failed to publish for about thirty years, only to be “resurrected,” that is rediscovered late in life. Their paths to this rediscovery were very different. Each published new work after she had been “resurrected,” and these new works were accorded all sorts of critical respect.

I was a Visiting Writer at a state university. To share my enthusiasm for these writers, I offered an Independent Study, English 500, called Resurrected Women. I neither got nor expected any further compensation for teaching English 500 which evolved into a sort of weekly book club where six of us shared our responses to the reading. Lots of reading. Four or five novels for each writer.  Mercifully the novels of Barbara Pym and Jean Rhys are short. Molly Keane’s work was more difficult to come by as she was not at all known in the States. We read her last.

Oxford-educated Barbara Pym published several books in the 1950’s, though by 1963 her publisher deemed her too old fashioned and declined her novel. (Remember that 1963 was the advent of the Beatles and Britain emerging from its wartime pall.) Her other novels fell out of print.  In these years she also worked for the International African Institute in London as an editor.  In 1977 the poet, Phillip Larkin and Lord David Cecil in an article in the Times Literary Supplement both declared her the most under-rated British novelist. Suddenly, ta-da! Her reputation shone, and her  books returned to the public in smart, uniform trade paperbacks. (And to a brand new audience in North America.) She was touted and sought after, accorded respect and royalties that must have felt dazzling after such a long hiatus.  Her 1977 novel, Quartet in Autumn, was nominated for the Man Booker prize. Though she published two more novels, sadly, she hadn’t much time to enjoy her new stardom. She died of cancer in 1980. A book of her diaries A Very Private Eye was published in 1985.

In general, Pym’s novels depict what one might consider to be little lives. Hers is a world of women, educated  gentlewomen of meager means, some married, most single. They live in cramped flats. They have uninspired jobs. To quote T. S. Eliot, they measure out their days in coffee spoons. Their social activities and relationships center around the practices and holidays of the Church of England. That is, the forms of the church, the church calendar. Spiritual life is a given, but not explored. No St. Teresa of Avila in these pages. A dry and tidy world where the characters wear cardigans.

And yet, gentle reader, these books have enormous charm. They have wit, and understated humor. The little lives in these pages are invitational; the dialogue is crisp and confident.  Pym never condescends to her characters. Her tone remains consistent from book to book, and whether married or single, her characters remain consistent as well. With the exception of the title characters in Jane and Prudence, the characters become a collective consciousness, as if, married or single, they are the same character at different stages of her life. (Pym herself never married.)

Rather like Maeve Binchy’s novels, there are no villains in a Barbara Pym book. No cads. No vile seducers. No Bitchy-Two-Shoes, though she does have a number of master manipulators and cunning schemers. She has been compared to Jane Austen, but Pym’s unmarried heroines are not young women seeking husbands. Sex plays no overt role in these novels. There are romances, celibate love affairs, wary kisses exchanged under the college gate in one’s youth. But the women in these novels marry houses; marriage is presented not in terms of passion, but security, and the pleasures of routine. (The unmarried Prudence in Jane and Prudence, visiting her married friend, Jane, complains to herself that her married friends never seem to give their guests a hot water bottle for their beds. Why is that?)

Though the heroines are not dashing, high-spirited unconventional girls, the fact that Barbara Pym creates heroines from these unlikely, cardigan-clad women, makes the novels themselves unconventional.

Pym’s books offer comfort,  like a cup of hot strong tea on a winter day.

Pym’s brief bright moment in the literary sunshine has passed. I’d venture to say she’s not much read these days. But perhaps this moment, now, when all our lives are sequestered, made  compact, cloistered, perhaps this is the moment to return to Barbara Pym. Following the November 2016 election, I scoured the house to find my old Barbara Pym paperbacks, all marked up from when I had taught the class. I reread every one of them. I read them before I tried to sleep. They assure the reader that small pleasures can, and indeed, must be mightily savored. Assurances much needed right now when all our pleasures are small, and all our days are fraught.