“Now You Know What I Do for an Encore…” 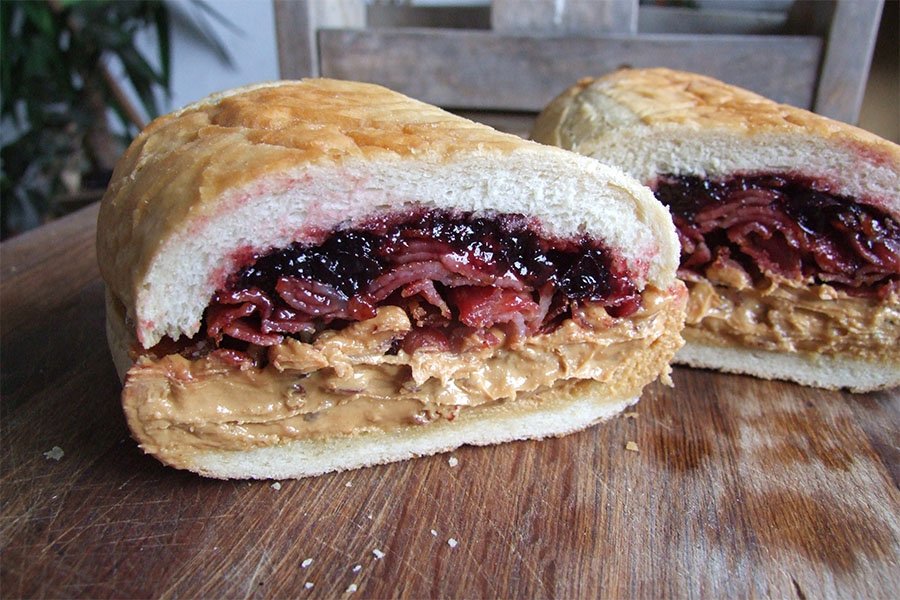 On the anniversary of Elvis’s death international crowds always gather at Graceland for remembrance and a solemn candlelight vigil. But here, in this house, we celebrate his birthday, January 8th 1935.

Beginning with an Elvis-centric family dinner while I was still writing the book (and before I had a publisher, or even an agent to represent it) Elvis’s birthday party evolved. For ten years it was the occasion for crowded, complex festivities: twelve solid hours of music, movies, jigsaw puzzles and specialty foods like Fools Gold Loaf.

Sophisticated palates might disdain Fools Gold Loaf. Too bad for them.

Fool’s Gold Loaf became an important ritual, the official ticket of admission.   At the front door you had to sing an Elvis song before you could (literally) join the party. Any song would do. We had books of sheet music, and lots of people to play the piano if you wanted. After you sang (with lots of backing vocals from people already there) you kicked off your shoes and came in the kitchen for your Fools Gold Loaf sandwich.  From there while music played, you could join people in the livingroom, or those chatting in the kitchen, welcome others at the front door, or try your hand at the thousand piece Elvis jigsaw puzzle set up on a card table (and usually completely finished by the end of the party.)

We were able to watch all of Elvis’s movies in one twelve hour period. 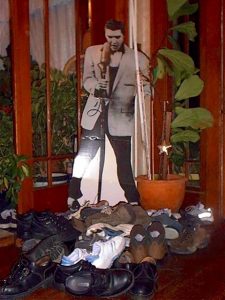 For my fam, Elvis’s birthday party, held on the closest Saturday to January 5th, rounded out our holiday season.  Getting everything ready was a huge process (and even longer to clean up!).  The day before the festivities Bear and Brendan moved our three upstairs TVs into the living room and borrowed some VCRs. These were placed on various small tables on either side of the big TV, and wired up (lots of extension cords and power bars). Elvis’s later, lesser and often goofy movies (Stay Away Joe, Tickle Me, Girls, Girls, Girls etc. etc.)  played on these small TVs with the sound off.  When one film finished Bear or Brendan would take it out and plug in another. In this fashion we were able to watch all of Elvis’s movies in one twelve hour period.

Only the big TV had sound coming from the speakers, and on this television we played our favorites. Once King Creole got slid into the VCR, if you wanted to talk, go into another room. (Movies are a serious business in this house.)

Everyone in our livingroom would stand up and cheer!  We’d play that scene two or three times. 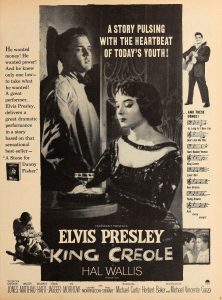 King Creole (1958), a rather dark film set in New Orleans, is adorned with great songs, and directed by Michael Curtiz (who directed Casablanca, thank you.) Elvis’s co-stars were Walter Matthau as Maxie, a thuggish gangland boss (utterly unlike the genial comedic figure he later became) and sultry Carolyn Jones as his long suffering mistress, Ronnie. As with many of the early Elvis movies, a virginal ingénue offers what amounts to palliative care for the Elvis character, Bad Boy Danny Fisher. But the sparks truly smolder between Danny and the older, experienced Ronnie.

In an early scene, Danny is cleaning up in the bar.  Maxie, Ronnie, and a few thuggish minions come in and insist that he entertains them.  Reluctantly he sings one song. They want an encore. He refuses. When Ronnie says, “Oh let him be,” Maxie starts to rough her up.  Elvis leaps to her defense, cracking a bottle on a table, shattering it, and brandishing the jagged edge like a lethal weapon, “Now you know what I do for an encore,” he says as he escorts Ronnie out the door.  Everyone in our livingroom would stand up and cheer! We’d play that scene over two or three times.

Ann-Margret was the only co-star to equal Elvis in talent and charisma.

After King Creole, we always watched another black-and-white, Jailhouse Rock (1957) and following that usually, Kid Galahad, a boxing picture that was surprisingly risqué for 1962. Without fanfare it portrayed an unmarried couple living together, the two of them chatting in the bedroom, the woman in her lingerie.  (The sort of lingerie made famous by Elizabeth Taylor in Cat on a Hot Tin Roof.) It also had Charles Bronson in an important role. Viva Las Vegas too played on the big TV just to see the chemistry between Ann-Margret and Elvis. They never did another film together (at the Colonel’s insistence, so the story goes).  She was the only co-star to equal Elvis in talent and charisma. The rest of them were just girls, girls, girls.

Gladys died the following year, 1958, leaving a hole in her son’s life. He was only twenty three.

Following those movies we might watch Loving You, another early film (1957) this one in color. Again, the ingénue, Dolores Hart (who became a nun!) got the boy, but again the sparks that fly are between Deke (Elvis) and husky-voiced Lizabeth Scott who is a dozen years older than he. Toward the end in a concert scene, one of the anonymous people in the audience is Elvis’s mother, Gladys. As he finishes singing, Gladys jumps out of her seat applauding wildly. I’m happy that Gladys got to be part of that because she died the following year, 1958, leaving a hole in her son’s life no one else could fill.  He was only twenty three.

Bear and Brendan blew out the candles on the Chocolate-Orange birthday cake.

After a couple of movies my dad would carve the turkey and the ham (or pork loin roast) and guests would line up to get a plate and move around the dining room table. There was always cornbread cut into squares and piled high, Maudie’s Potato Salad, red beans, rice, and much else adapted from any number of Elvis cookbooks. Following dinner and another movie, everyone gathered in the dining room to sing “Happy Birthday” and “I Can’t Help Falling in Love with You.” Bear and Brendan blew out the candles on the Chocolate-Orange birthday cake.

We usually saved Blue Hawaii (1961) for last. By now it was late, and only the hardcore was left, perhaps ten of us.  Blue Hawaii too has a gaggle of girls, and a reserved older woman. But it also has the charmingly silly Angela Lansbury playing Elvis’s mother (“Chadwick!”). At the end of the film, we would all spontaneously stand up, and sing along, “I Can’t Help Falling in Love with You” (“Wise men say……”)

We wish Elvis had the opportunity to show the world “Now you know what I do for an encore.”

Our Elvis parties ended in about 2002 because lives change. Bear graduated from USC and went to work; Brendan left home for USC. Still, all these years later, we and our friends all share an email salute to the King on January 8th. We wish he had had the opportunity to show the world: “Now you know what I do for an encore.”  Instead, throughout the 1960s he made one dispiriting picture after another, twenty-seven movies in eight years.

His last film, a Western, Charro! (1969) had no songs, no bouncing babes. In it Elvis plays the title character, a sweaty, unshaven, weary adult, a man who wants to turn his life around.  Sadly, that was a role he fulfilled all too well.

Sophisticated palates might disdain Fools Gold Loaf. Too bad for them. It was created by a restaurant in Denver. Elvis loved it so much he would load all his friends into his private plane, the Lisa Marie, and fly from Memphis to Denver, land there, and have Fools Gold Loaf sandwiches delivered to the tarmac. Then fly back to Memphis. (I have recently read in the classy pages of the New York Times Cooking column of a French sandwich, a jambon-beurre. that sounds suspiciously like Fools Gold Loaf minus only the peanut butter.)

Take several loaves of French bread; slice them in half lengthwise and warm in the oven   till they are crisp. In half of them cut an oval in the center and scoop out innards so you have a sort of “dish” in the middle. Fill this with peanut butter, then grape jelly and top with lots of bacon, fried crisp and kept warm. Take the other half and put it on top. Slice for individual sandwiches. Have napkins on hand.

This is my sons’ favorite birthday cake.  I wish I could say it was a gourmet creation, but no. Use your usual boxed chocolate cake mix.  Instead of water use orange juice, or better yet, concentrate orange juice not quite full strength. (That is, less water, so you still have liquid, but the orange taste is more concentrated.) Over the bowl using a cheese grater take a big orange chosen for its peel (fresh, moist, preferably pretty thick-skinned) and grate the orange zest off.  Stir into cake mix.  Bake as directed as a sheet cake. This cake can be made the day before.

When cool, frost with powdered sugar and softened butter or cream cheese frosting. When the recipe calls for vanilla, use orange liqueur, or orange juice.  (Of course you can do this with frosting from a can too!) Spread thickly and evenly over the cake. Then, again using your cheese grater, grate a whole lot of orange zest all over the cake so it’s showy.

The real pleasure of Maudie’s Potato Salad is the time and care she puts into dicing the potatoes up really small.

Boil ten pounds of potatoes up whole and with the skins on till tender. Drain and cool. Peel and dice pretty small into a big bowl. To this add some chopped celery and chopped red onion.  Parsley and green onions, chopped.   Maude sprinkles with Lemon Pepper as she goes along. For color too she also adds, a jar of pimentos, drained. A can of sliced olives, drained.

All this can be done in advance and set covered in the fridge. This gives the flavors time to meld.

Dressing:  In a bowl combine big dollop of mayo with some mustard (Dijon is best), some salt and pepper and a dash of lemon juice.  Do all this to taste and preference. Stir well. Fold into salad. Serve topped with thin-sliced hard boiled eggs and sweet or smoked paprika.