Forty-five years after his death Elvis remains both American myth and American mirror. 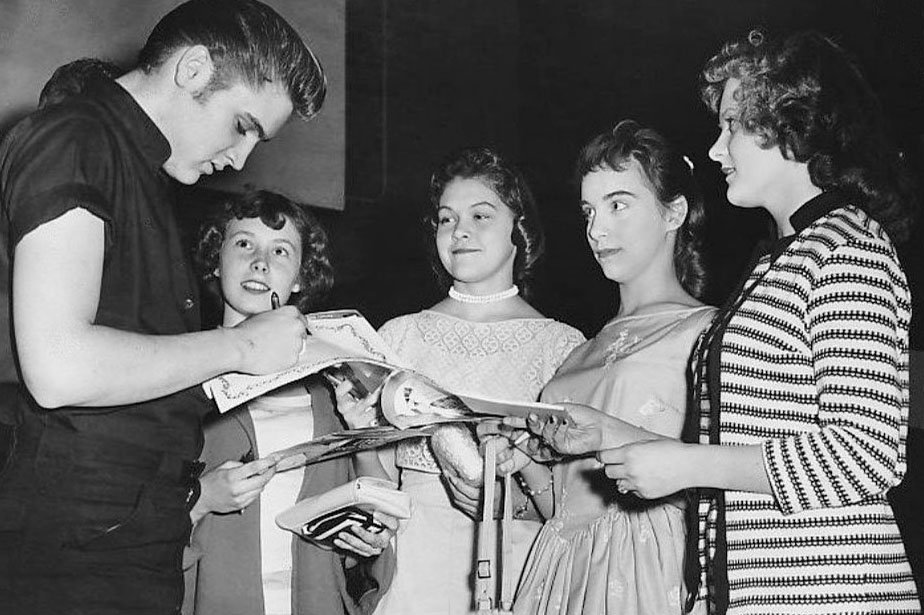 Elvis is not an icon, static as Mount Rushmore. Forty-five years after his death Elvis remains a presence though not present—exactly his role in my novel, Graced Land. Elvis informs the book like lightning illuminates a landscape.

Fittingly, Elvis adopted a lightning bolt for his logo and from the very beginning of his career, when he was not yet twenty-one, till he died at forty-two, Elvis Presley electrified us. His life ended, but as one critic has noted, his career did not. Why does he still have the power to leave us all shook up? The answer lies, broadly speaking, in the music and the myth.

In his first television appearance in 1956, Elvis was preceded by the June Taylor Dancers. One look at these tap-dancing tutu’d cuties tells you why—and how—Elvis Presley changed everything in America. With their bustled behinds bouncing in unison, the June Taylor Dancers could have come straight from a 1910 Floradora chorus line. Exit ladies, enter Elvis. Immediately, this young performer radiates energy, tension, intensity, desire, unleashed sex appeal, and (depending on your point of view) untutored genius. The Floradora sensibility is in serious trouble. Elvis was dangerous. Young people in 1956 not only copied, courted up, embraced this danger, they looked for more with other musicians, Chuck Berry, Buddy Holly, Bill Haley, Sam Cooke.

Elvis set off an equally negative reaction among the old guardians. With suspicious minds, dire warnings, they heaped abuse, blamed Elvis—his hair, his clothes, his body language, his lyrics,—for juvenile delinquency, for teenage sex, for the unthinkable, that most dreaded word: integration. The music Elvis unleashed was not pure. On the contrary, early rock music was all about convergence and integration, melded of guts and gospel, rhythm and blues, bluegrass, sex, suggestion, energy, mystery and—to the old guard’s dismay—race.

Music flows over barriers and under closed doors and through the locked transoms of closed minds.

No coincidence that the mid-Fifties also gave momentum to the Civil Rights movement. In 1954 the Supreme Court issued Brown vs. the Board of Education declaring segregated schools unconstitutional. The 1955 Montgomery Bus Boycott went on for over a year while people walked to work rather than ride buses segregated by law. In 1957 photographs of the National Guard, armed, escorting Black children into an Arkansas classroom burned into the American psyche. These events coincided with the birth of rock music because music is like water: it flows over barriers and under closed doors and through the locked transoms of closed minds.

Brown vs. the Board of Education, notwithstanding, decades would pass before schools were integrated. Nor did radio stations instantly shed Perry Como and Nelson Riddle. But invisible radio waves washed over America, into urban enclaves and rural outposts. Between 1956 and 1959 Elvis had twenty-eight Top Forty hits on the charts, for a total of 184 weeks. But Elvis is more than music, or musical history. He personifies the myth, “Made in the USA.” His tragedy is pure Americana.

The King died on his throne in August 1977, found face down in his bathroom.

In American tragedy, unlike Shakespeare’s, the hero cannot start at the top and tumble into ruin. In American tragedy, the hero must start at the bottom. He must claw and scramble, overcoming obstacles, reach the top, shine in his moment, and then, die grimly and before his time. In short, stories like Abraham Lincoln’s, or Malcolm X’s, greatness born in poverty, achievement against the odds, early and unlooked-for death.

In 1935, in the midst of the Great Depression, Elvis was born in Tupelo, Mississippi in the equivalent of a log cabin, a two-room “shotgun” house. His parents were uneducated and impoverished. Elvis was three years old when his father went to prison for forging a check for the sale of a hog. For the eight months Vernon was in prison, Gladys and Elvis boarded with relatives. In 1948, this hardscrabble family left rural Mississippi for that post-war frontier, the city. Elvis spent his teen years in a federal housing project in Memphis. He attended (segregated) Humes High, graduating in 1953. He took a job as an usher at a local theatre and then as a driver for Crown Electric. He went to Sun Studios and paid to make a record for his mother. The secretary at Sun (so the story goes) asked him who he sounded like. He replied, “I don’t sound like no one else, ma’am.” And that was true. He touched the minds and hearts (the tapping feet and clapping hands) of millions; he attained Graceland, and died a tragic wreck. Following a long, insomniac’s nightmare, the King died on his throne in August 1977, found face down in his bathroom.

“All that cheerful damn democracy stained everywhere with slavery and injustice.”

A character in Graced Land, Sid Johnson, a middle-aged Black man, and Emily’s colleague at the welfare department, tells her about an Elvis concert he had unwillingly attended in Chicago in the fall of 1976, especially remembering “American Trilogy,” a song that carries the silt of American sadness.

“Elvis was so drugged that he starts to talk and all he could do is slurp, and slip up,” said Sid. “He’s up there spluttering on, getting all misty and modest. His face was puffy and bloated and he was sweating like a pig under those lights. He’d been poured into his clothes. Or maybe they’d been painted on, but you could hear the seams groan. He was drugged and exhausted, his eyes were like little slits in all that fat, and he looked like he hadn’t slept in months. He could hardly stand, but by God, Emily, the man could sing! ‘The Impossible Dream!’ Elvis sang that song so you remembered it was Robert Kennedy’s favorite song and you remembered the courage of everyone you ever admired, the living and the dead, from Martin Luther King, to my old grandmother. And as if that wasn’t enough, Elvis goes on to ‘American Trilogy,’ ‘Dixie’ and ‘The Battle Hymn of the Republic!’ I mean, Emily, we are dealing here with old war-horses of songs, songs that have been beat to death and yet live. Can these old, spavined pack mules of songs live while they’re carrying the freight, the weight, of the history of this country? All that cheerful damn democracy stained everywhere with slavery and injustice? Elvis made these songs live, Emily. We all felt it. We’re all crying and clapping, and next thing I know we’ve all jumped up and reached out, holding hands with those beside us. We’re singing, shouting! Crying out!” Sid drew a deep breath. “It was just like church.”

If every unhappy hypocrite in this country were suddenly struck shoeless, there would be a lot of barefoot Americans.

Elvis remains both American myth and American mirror. He embodied and exaggerated standard American traits: high voltage energy, boundless generosity, endemic humor. He also had demons that called forth a complex hypocrisy. The devout boy in the Assembly of God congregation, the gospel singer, the great supporter of law enforcement (as in the film Elvis and Nixon) the flamboyant entertainer in beaded capes throwing sweaty scarves into the adoring audience, this man went to bed drugged mindless, night after night, or rather day after day in hotel rooms with foil-covered windows to maintain darkness. Elvis’s death still haunts us because he reflects us, and he reflects on us. We mutely recognize that if every unhappy hypocrite in this country were suddenly struck shoeless, there would be a lot of barefoot Americans.

He was so dangerous they put him in irons made of schlock, musical manacles

Elvis’s death was both tawdry and genuinely tragic. His enormous talent was often channeled, trammeled into the tawdry, the mediocre. Certainly after he returned from the Army in 1960, his movies grew increasingly static, some of them excruciatingly stupid. As my character Joyce Jackson watches him onscreen, she mulls, “Elvis was being punished for the sheer raw energy, the excitement he’d so effortlessly generated in his early days. He was so dangerous they put him in irons made of schlock, musical manacles, movies where he remained an everlasting boy, never was allowed a man’s pain or a man’s pleasure, a man’s needs or a man’s response to women, not even a man’s music, just prescription tunes with which the audience was to be dosed at regular intervals.”

The research I did for Graced Land convinced me that his mother’s death in 1958 was the lynchpin of his tragedy, and that Colonel Parker was the villain of his story. I believe that the Colonel hovered over Elvis like a greedy cloud, and that anything Elvis was able to do with any merit (the ‘68 Comeback Special, for instance) he did in spite of the Colonel. In the seven years between 1970 and his death in August 1977, Elvis gave over a thousand concerts. Mathematically, the equivalent of a live concert every two and a half days. “He sang himself to death,” says Joyce Jackson.

I will go to the Pickford to see Elvis even if I have to wear a Covid space suit, and inhale powdered popcorn through an air filter

We shall see what the brand new Baz Lurhmann biopic makes of Elvis’s myth, his music, his career, and the role of Colonel Parker. Casting the beloved, genial actor, Tom Hanks in this role gives me some pause. But I will go to the Pickford Film Center to see Elvis, even if I have to haul my own Covid bubble like a space suit, and inhale powdered popcorn through an air filter.

The King may have left the tired old building of this life, but he moved into a larger arena than he ever actually filled with fans. In dying he left behind the bodyguards as he left behind the body. Free at last, he joined the rest of us in the supermarket, the pizza palace, the bowling alley, the donut shop where his music still plays, rains down from tinny speakers. Elvis’s myth and music live on in all these places. Why should his spirit be anywhere else?