Music for movies proved integral to the writing of The Great Pretenders, from Casablanca to Moonglow. Read about the inspiration and listen to a playlist of movie music that informed the book! 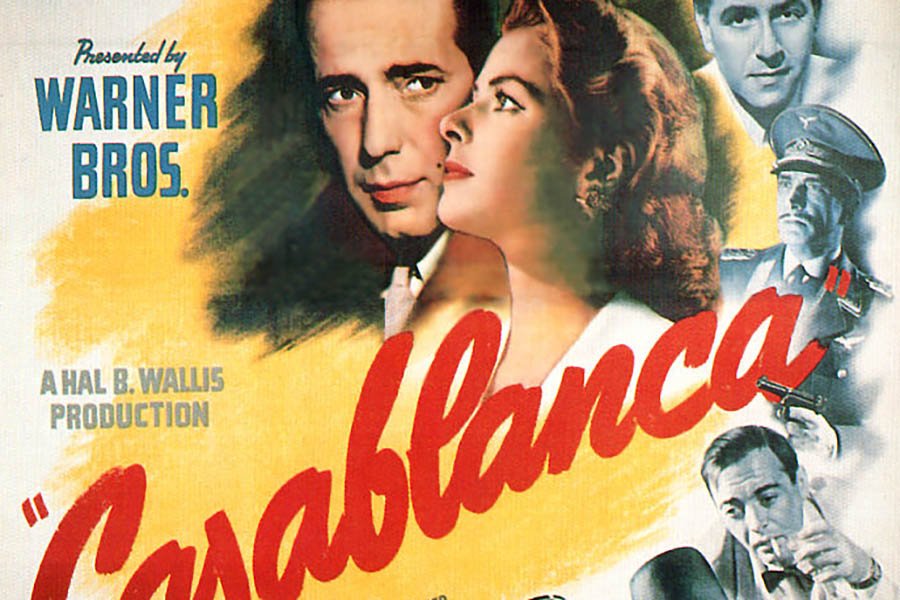 If only life were like the movies! If only, when you met your True Love some sweet melody assured you, Yes! This Is The One! If only, in a deeply romantic moment a crash of cymbals indicates experience you will never forget! If only, before you are about to make a hugely significant mis-step, if only the music would swell to a deafening roar indicating danger!

Why is it then that characters in films about to encounter awful risk, why do they not heed the swelling strings that you and I, the audience, recognize is crying out: DON’T DO IT!

That’s the magic of music in film: we know the characters can’t hear it, but disbelief suspends beautifully, and the fact that we are audibly alerted to the situation, the emotions, brings us more vividly into their experience. Music tells the audience (if not the characters) what they are supposed to feel.

It’s up to the composer to understand what the film needs, and what the director wants (not always the same thing) and to create music, literally to underscore the emotions that are visually portrayed. (I’ve watched this process up close now for the fifteen years or so that my son Bear McCreary has been a film and TV composer,  I have witnessed as he has recorded with 100 piece orchestras in teak-lined recording stages, or in  tiny little studios recording a single fiddle, or a flute.)

As I began to work on The Great Pretenders I realized that not until the 1950’s did producers make any attempt to put their movie music into the airwaves, to be heard on the radio, quite apart from the film. In the 50’s film music began to be a separate, meaningful cultural artifact.

In fact, the 1955 #1 Billboard hit song “Rock Around the Clock” by Bill Haley and the Comets was so successful that the song was the basis the film Rock Around the Clock, 1956 (the first film where black and white musicians play together onscreen) Then, there are the anomalies like Gene Pitney’s “The Man Who Shot Liberty Valance” that reached #4 on Billboard’s Top Ten in 1962, and never once appeared in the film, The Man Who Shot Liberty Valence, John Ford’s last great Western, 1962.

While writing the 1955 gala party Roxanne attends to celebrate the opening of the fictional Banner Headline, I played much of the same music that the chamber orchestra plays Researching these proved entertaining.

The song, “The Last Time I Saw Paris” provided the title for the 1954 film of that name, and the song won an Oscar. But really, the song had been written in the early 1940’s, lyrics by Jerome Kern, music by Oscar Hammerstein. The film, The Last Time I Saw Paris was a retelling of Fitzgerald’s story “Babylon Revisited,” but the song, to this day stands alone, quite aparat from, and actually superior to the film.

At this 1955 party, populated by literally the High and the Mighty (a 1954 John Wayne picture) all the film people there are annoyed, and a little undone when the chamber orchestra breaks into the “Ballad of Davy Crockett” (in the top five for seventeen weeks in 1955!) Disney and television were changing the entertainment landscape forever–and everyone there knew it.

But by far the film that most totally permeates my novel is Casablanca with its famous song “As Time Goes By.” Early on I considered this for a title, but another novelist used it while I was writing. Originally written in 1931 “As Time Goes By” has proved itself the most durable of all pop tunes for the last eighty plus years. Perhaps it’s the somehow comforting assurance that “the world will always welcome lovers….” Though I did not allude to this song or these lyrics, I hoped that line would echo at the end of my book.

Listen to a Playlist of Movie Music