A place of Grace where you could be assured, comforted and uplifted, all at the same time. 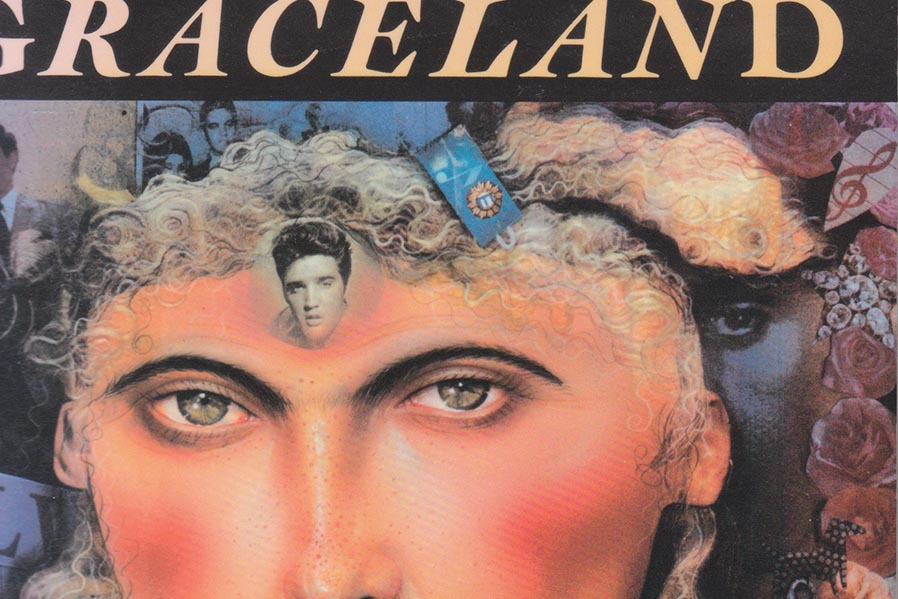 Never has folding laundry produced such creative results as that day in 1990 my mother and I were working our way through the laundry basket, casually reminiscing. We were remembering the elaborate shrine to Elvis on the front porch of a small tract house in San Bernardino. I remarked, “I always thought a woman with two daughters must live there.”

As soon as the words crossed my lips, I knew the girls were named Priscilla and Lisa Marie. I knew that central character, Emily would call on a long forgotten episode in my life when I was briefly a social worker. I knew the #1 Elvis fan, Joyce, must clearly have been born Rejoice. And I knew the title would be Graceland. Not just Elvis’s house, but the very notion of a place of Grace, a place where you could be assured, comforted and uplifted, all at the same time.

I was deep into the writing before the thought crossed my mind: what if I can’t use that title? I scoured all over the finest of fine print of Paul Simon’s 1985 glorious album, Graceland and I saw not one word of trademark or permission granted or any such thing. So I went ahead and wove the notion of Graceland into the fabric of the book.

Graceland™. Oh no! I don’t know how Paul Simon got away with this, but we were in trouble.

In 1991 Grove Press (then Grove Weidenfeld) bought the novel. I went to New York to meet the agent and publisher. I brought with me a bunch of coffee mugs I’d ordered from the Graceland gift shop, and handed them out like party favors to the Grove staff, young people mostly who were eager and personable. Everyone was delighted with the coffee mugs, delighted to have so bright a novel with such lively possibilities. Then, glancing more closely at the coffee mug someone noticed. Wait! There was a little trademark sign there beside Graceland™. So tiny that I had never seen it, even with my glasses. Oh no! I don’t know how Paul Simon got away with this, but we were in trouble.

Thus began a flurry of letters (this is 1991) between Grove’s attorneys and the formidable, the monolithic giant, Elvis Presley Enterprises. Grove and I waxed eloquent about how the novel only added luster to Elvis’s name, to the legends of his generosity, and extolled both his tragedy and his triumph etc. etc. Finally it was decided that Grove would mail a copy of the galley (the advanced reading copy) to Jerry Schilling, the Main Vein (other than Priscilla) of Elvis Presley Enterprises. Schilling would read it and get back to us. (Schilling, who is still alive, has a key role in the new movie Elvis, instrumental in helping Elvis perform the 1968 Comeback Special that revitalized his career after nearly a decade of schlocky malaise.)

Jerry Schilling did get back to us. In fact he telephoned me, personally. The answer was no. He gave no reason and was deaf and dismissive to anything I might say. Elvis Presley Enterprises had the power to withhold permission of the word Graceland, and withhold they did.

What to do? The advanced reading copy with a striking cover had already gone out to booksellers and the press—with the title, Graceland. Moreover, by now, the all-important sales conference loomed. The publicity person, Ken Siman, insisted that whatever we called it, it had to start with G, that people would only remember that much. Booksellers and press would not know it by any other name. Gnashing ensued.

At some point I remembered the great Elvis song, “Promised Land,” an energetic late-career number about the pleasures and tribulations of road trips.  Grove and I settled on the awkward Graced Land. It started with a G. It alluded to the book’s thematics. It wasn’t great, but it would do. Moreover, Elvis Presley Enterprises couldn’t touch us. And it could be gently elided when spoken drawled over, you might say, Grace…dland.

To tout the book at Grove’s December sales conference, my son Bear (age thirteen) made a video tape of me at my desk talking about Elvis and the novel. My mom held the old VCR camera (semi-steady) while he and Brendan (age nine) joined me for the final scene.  My dad helped me recreate the shrine as it was described in the novel, packed it all up and sent it UPS to New York. Ken Siman unpacked it, plugged in the Christmas lights, popped a cassette tape of music I had recorded into a boom box, and hit Play.  Ta-da!  Graced Land was officially the stellar offering at Grove’s sales conference in December.

The novel went forward into print, collected a tsunami of rapturous reviews.  Also, happily for us, in spring 1992 the US Postal Service unveiled the first Elvis Stamp after a nationwide voting process: did people want the “Young Elvis” or the “Old Elvis?” “The Young Elvis” won. (Why could there not have been two?)

The book itself seemed to bubble with the spirit of Elvis.

I went on a lengthy tour. Graced Land played well everywhere, bookstores, lit festivals, lots of radio and even TV. Readers responded to the emotion, the infectious joy, the humor and music.  The book itself seemed to bubble with the spirit of Elvis, connecting me with fans all over the country. For years afterward they continued to send me their homespun mimeographed newsletters, their buttons and bookmarks. Nearly all of these fan clubs collected money, sent funds to charities in Elvis’s name. (His incredible generosity, a little known fact of his life, was detailed in The Best of Elvis, by my friends Cindy Hazen and Mike Freeman).

Despite all this excitement surrounding the book, I was alarmed because we still did not have paperback sale here in the States.  Grove assured me they’d paperback it themselves if need be. Books get reviewed in hardcover, but they get read—they get passed-around dog-eared with love—in paperback.  I so wanted that for my novel.

I felt like going to the hotel bar and having a great big swig of What Happened? over ice.

Graced Land won the Pacific Northwest Booksellers Award. In March 1993 I went to the Booksellers’ meeting held at Spokane hotel. On the last day the PNBA winners sit on a dais and booksellers line up before them for autographs on the free copies supplied by the publisher. O Happy Day! The career author (moi)  gets to sign for enthusiastic booksellers, gets to  bask in all that praise and make all those much-to-be-envied connections for that book, and the next book, and the book after that….

Only. There weren’t any books. Maybe a dozen copies of Graced Land that the rep had brought with him, but nothing from Grove. Nada. The booksellers lined up in front of the other authors, signing away.  Pretty soon I took my pen and my purse and left. I felt like going to the hotel bar and having a great big swig of What Happened? over ice. There was nothing to do but go home.

I never did know What Happened. That morning, word percolated furtively about, bits and dribbles intimations that, put bluntly, some sort of really bad shit went down at Grove. The entire staff with whom I had worked so cordially and fruitfully, they were all out the door. Gone. Gone so fast they probably didn’t have a chance to grab their Rolodexes.

I laughed and cried all over again. And I felt like perhaps Elvis never truly left the building.

If this had happened now in the 21st century, whatever bad shit went down, it would have been all over the internet instantly. Everyone (or everyone who cared) would know in a matter of hours. But in 1993, there was no one to ask. No one to write to. No one to call.  I do not know if bookstore orders went unfilled. Certainly there was no talk of an American paperback. Not long after, Grove (the new Grove) declared the hardcover out of print. I bought back a bunch of copies that went into the basement, and got damp. Reeking of mildew they linger still in my basement. 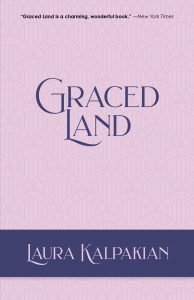 But now, thirty years later Graced Land is restored to glorious print. June 2022 Paint Creek Press has reissued Graced Land in a beautiful trade paperback edition. It’s part of the reissue of all my St. Elmo novels and stories. When I first re-read Graced Land ,  as we were prepping for publication, I laughed and cried all over again. And I felt like perhaps Elvis never truly left the building.