Gene Fowler is a raconteur of the Old School, rooted in the rough-and-tumble world of reporters, men who bellied up to the bar, wrapped their ink-stained fingers around the bottle, and told each other mostly true stories. 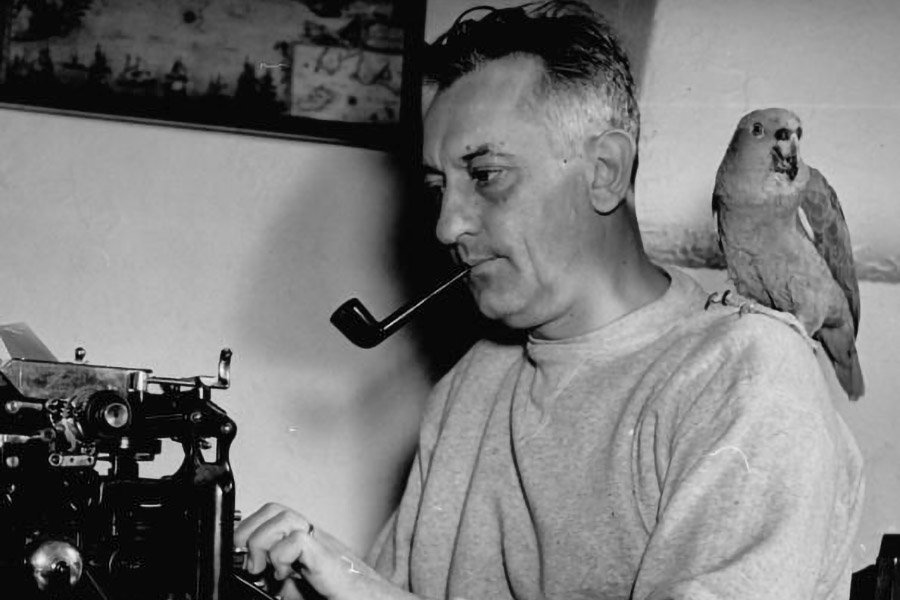 Gene Fowler is not what you call a stylist. Nowhere in his books do you pause over the beauty of a well-wrought sentence, the airy word-confection. But, oh, could he tell a story! Like the more renowned Joseph Mitchell, Fowler is a raconteur of the Old School, rooted in the rough-and-tumble world of reporters, men who bellied up the bar, wrapped their ink-stained fingers around the bottle and told each other mostly true stories.

Mitchell and Fowler both seem to have had the same gifts, instincts. Like magnets, they drew out the stories of eccentric, sometimes dubious characters who spilled their guts in generous, and usually garrulous detail while the writer would nod, bemused at the intrinsic folly of the human condition.

Joseph Mitchell (1908–1996) originally from North Carolina, worked for a number of New York newspapers before joining the New Yorker. His New Yorker pieces are famous for portraying people whose otherwise unsung lives he made memorable. In 2008 some of his work was published in a Vintage edition called Up in the Old Hotel, a book I loved. Fowler’s work has not had a 21st century renaissance. Fowler’s books you will more likely find in the library discard sale bin.

Gene Fowler (1890–1960) grew up in Denver amid the twilight of the pioneers. He began his reporting career with the Denver papers, and moved on to New York in the 20’s and 30’s, the Golden Age of Newsprint (note, I do not say journalism). In his era he was a successful reporter with friends up and down social spectrum, a prolific author of all sorts of books that went into many editions. He even wrote plays, and later, in the 40’s, he had a long, laudable career as a Hollywood screenwriter. The hallmark of his writing is his narrative voice, rambling, self-effacing, anecdotal, both amused and amusing, and his near-perfect-pitch in rendering dialogue.

Fowler’s memoir of his youth—the fantastically ill-named A Solo in Tom-Toms—has nothing to do with tom-toms.

His best known works are biographies, usually of likeable rogues, most of whom he knew, some he knew well. These biographies have no scholarly footnotes, no indexes, no bibliographies, no fulsome acknowledgments of accommodating librarians. They are chatty, anecdotal, full of empathy for the often less-than-stellar antics of his subjects. Among them:

Beau James chronicles the life of dapper Jimmy Walker (1881–1946) mayor of Prohibition era New York who was brought down in scandal. When Beau James came to the screen in 1957 Bob Hope (of all people!) played the lead role.

The fantastically gifted, and occasionally slimy New York attorney, William Fallon (1886–1927) is the subject of The Great Mouthpiece. Fallon, renowned for his oratory and photographic memory, represented mobsters and criminals. (I was happily surprised to see Fallon as a character in several episodes of the lavish HBO Prohibition series, Boardwalk Empire.)

Fowler’s best known biography, Goodnight Sweet Prince, chronicles the high life and good times of tortured actor, John Barrymore, as well as his slow but assured alcoholic decline. Barrymore’s many women do not come off well in this book.

Barrymore and Fowler were friends for decades, part of a cadre of hard-drinking, raucous compatriots who hung out in Hollywood in the 1940’s, a group that included W. C. Fields, and the unforgettable aesthete Sadikichi Hartman. With several other middle-aged Bad Boys, their less-than-stellar antics were the subject of Fowler’s last book, Minutes of the Last Meeting (1954). In his heyday, Gene Fowler himself was a likeable rogue.

Gene Fowler is a generous writer with boundless sympathy for human foibles.

But his childhood memoir, A Solo in Tom-Toms, has a serious, even wistful core: a young man, seeking a father, a boy hungry for approbation, and direction in life.

A Solo in Tom-Toms opens with the information that at the age of thirty Gene received a letter from the father he had never met, Charlie Devlin. These first few pages are far more poignant than the usual Fowler-fare. However, that done, he reverts to a long genial, rambling account of how he happened to be strapped for cash on his day off in September, 1920. He went into Manhattan, to the newspaper office just off the Bowery to wheedle an advance from the city editor. While awaiting the grizzled editor’s decision, Gene picked up his mail, and started leafing through it. Suddenly, the whole place was shaken by a loud blast. A bombing on Wall Street! Gene hotfooted to the nearby site of the disaster where thirty people were killed and one hundred injured. He forgot to bring paper, and so, was furiously taking notes on the envelopes he had just picked up. He soon filled up the envelopes, opened them so he could take notes on the letters, and came upon, “Dear Son……”

From there, the memoir returns to the beginning. Charlie Devlin falls in love with the church choir soprano, seventeen year old Dodie Wheeler. Charlie and Dodie married, but lacking funds they lived with her mother, the redoubtable Elizabeth Wheeler. Mrs. Wheeler and her son-in-law clashed, and Charlie was no match for this formidable woman. Just before Gene was born, they got into a standoff over a cup of coffee. Charlie lost, left, retreated to the mountains where he stayed for thirty years, never again face to face with his wife. Dodie remarried, a man named Fowler who legally adopted her son, but Gene lived with, was brought up by his grandmother. He never was quite sure what his last name was, Devlin, Wheeler or Fowler. Dodie died when he was thirteen, and she remained enshrined in memory ever after.

The youthful Gene was full of high spirits, restless in school, and something of a delinquent. In his Denver years as man and boy, Gene crossed paths with a vast array of oddball characters, a connoisseur of tea, a spooky taxidermist, a sponging faux-colonel, the famous bandleader, Paul Whiteman (and his father), the con man who boarded at his grandmother’s house, the aging Buffalo Bill and the youthful Jack Dempsey. And many others. Fowler was the great collector and purveyor of anecdote.

In his early twenties Gene was offered an interview with the editor of The Republican to be a cub reporter. He immediately quit his city job, and rushed home to tell his grandmother his great news! She wanted to know what it paid.

“And you have thrown away a twelve-dollar a week job for one that you may or may not get?”

“You are not, shall we say, an expert at figures….Believe me, Gene, twelve dollars is more than six dollars, incredible as that may be.”

“But I’m going to be a newspaperman!”

“You just never were any good at math.”

Even when I first read him in high school, I shared Gene Fowler’s enthusiasm for the writing life. And revisiting several of his books recently, I still find him an engaging storyteller with boundless sympathy for human foibles. In this grim spring of 2020 he can still make me smile.