Writers are always advised: write from what you know. I have more often written from what I don’t know, what vexes or haunts or troubles me. 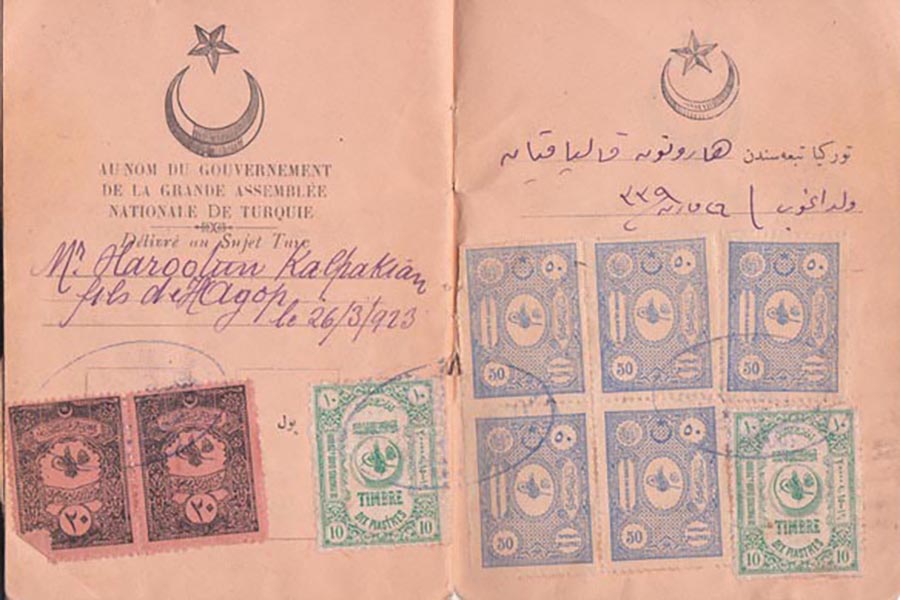 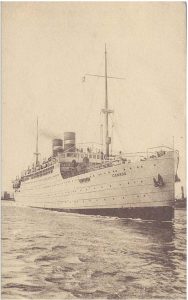 Ship the Kalpakians arrived in.

Contented people do not uproot, repudiate their pasts and move on. To leave one’s home or homeland requires energy, strength, determination, or maybe just desperation. Somewhere in the past of all American families, such restless people exist, people who crossed frontiers of every sort.  To cross the frontier in an American context suggests a confrontation with nature, venturing into unknowable dangers, unmapped places. My father’s people, the Johnsons, were Mormon pioneers.  To cross the frontier in a European context suggests a confrontation with history, with language and identity: one shows one’s papers, declares one’s origins, crosses into another country, becoming foreign. The Kalpakians were Armenian immigrants, leaving Turkey, coming to Los Angeles in 1923.

Whether immigrants or pioneers, in their hearts and minds these people carry their memories and music, their recipes, their religion, for some their old languages. In short, they bear with them old identities that cannot be declared at Customs, nor tossed out of overladen Conestogas rumbling west. Over time, for immigrants and pioneers alike, their remembered identities and adventures are gradually converted into narrative, family stories that refine difficult, even painful experience into the well-made, oft-told tale. These narratives become anecdotal inheritance passed down to the generations that follow. Collectively these stories preserve family identity. Eventually (however diminished the nugget of truth at the center) they evolve into truth.  They are believed.

The Johnsons, a huge, garrulous tribe of mostly rural Latter-day Saints, have many stories chronicling their trials and triumphs, especially triumphs: how they outsmarted someone, or enjoyed some miraculous piece of good luck, how they (especially the men) were brilliant. In their tales everyone is devout, there’s no heartbreak, and certainly no divorce; death is preferable to divorce.

The urban and urbane Kalpakians committed their past to silence. My Armenian grandparents sank their old country lives—war, genocide, deportation, unthinkable loss—into a silence so profound that the past was deprived of narrative oxygen. With three exceptions. From all that was otherwise unspeakable, my Armenian grandmother fashioned three charming stories, The Cup of Coffee Story! The Hot Water Tap Story! The Dumb-bell Story! Each was a reiterated telling of smooth and shapely tales purged of pain, and told in exactly the same way with an exclamation point and an assuredly happy ending!

When I first began to write fiction seriously in 1973 I began with her three stories and replaced that exclamation point with a question mark, asking what lies beyond and surrounding the well-told tale. I published these stories in America and internationally. But in truth, I am still writing and revising these stories, still asking questions; the more I know of the past, the more questions I have. Beginning with These Latter Days, I explored the Johnson family past in fictions I created.  But I have never written a book-length memoir because I cannot reconcile the pioneers and the immigrants. The two stories simply would not entwine. Why? Well, think on this: both of my grandfathers were born in 1887, Haroutune Kalpakian in Mersin, a Turkish port city on the eastern Mediterrean, and William A Johnson junior in a dugout, a shelter propped up with beams and covered with a sod roof in Madison County, Idaho.

My father’s people were Mormon converts all; the Johnsons came from Sweden in the 19th century. A vast tribe (my grandfather was one of twelve children, eleven lived to adulthood) they moved westward to Zion, and on to Idaho hauling their goods and families in wagons or pushing handcarts, and later they moved up and down the mountain West in rackety cars. They farmed and failed, remained restless, often impoverished, and lived in rugged, ragged circumstances. No joke: my dad, Bill Johnson, started high school living in a log cabin.  After high school in 1937 he went to Ricks College in Rexburg, Idaho. (Only he and one other of the forty Johnson cousins went to college.) He was about to enroll at University of Utah when Pearl Harbor was bombed. Bill Johnson joined the Marines, transferring later to the Navy where he saw action on an aircraft carrier in the Pacific. Stationed at Long Beach, California, he met Peggy Kalpakian, a USC student, at a USO dance. Six months later they married, and after the war they remained in Southern California, close to her Armenian family. Ironically (long story) we kids were raised in the Mormon church.

Summer vacations, my father drove us all to Utah and Idaho to see his relatives.  Amid these bland, fair-haired Mormons with their slack grammar and flat voices, I knew I was not like them.  When I went to Armenian picnics with Grandma, and had my cheeks pinched by smiling old folks who spoke Armenian to her, I knew I was not like them either. I was different from the Armenians because they didn’t speak English. I was different from the Mormons because they did. In short, I knew who I wasn’t. I grew up on a sort of ethnic frontier, an undefined edge, constantly fraying. This is an uneasy place to live, but it is fruitful ground for a fiction writer.

Writers are always advised: write from what you know. I have  more often written from what I don’t know, what vexes or haunts or troubles me. Growing up in sunny Southern California I was surrounded by Armenians who made light narratives of their earthly pain. I was raised in the Mormon church that alternated milk-and-honey estates in heaven with the grisly suffering of sinners in the afterlife. While I never could reconcile the two, the combination has endowed me with more than curiosity, with ungovernable empathy. I remain alert, always, to both stories and silences, asking not simply what then? but what if?....