For eighteen years the ideas for this short novel hovered over my imaginative life. 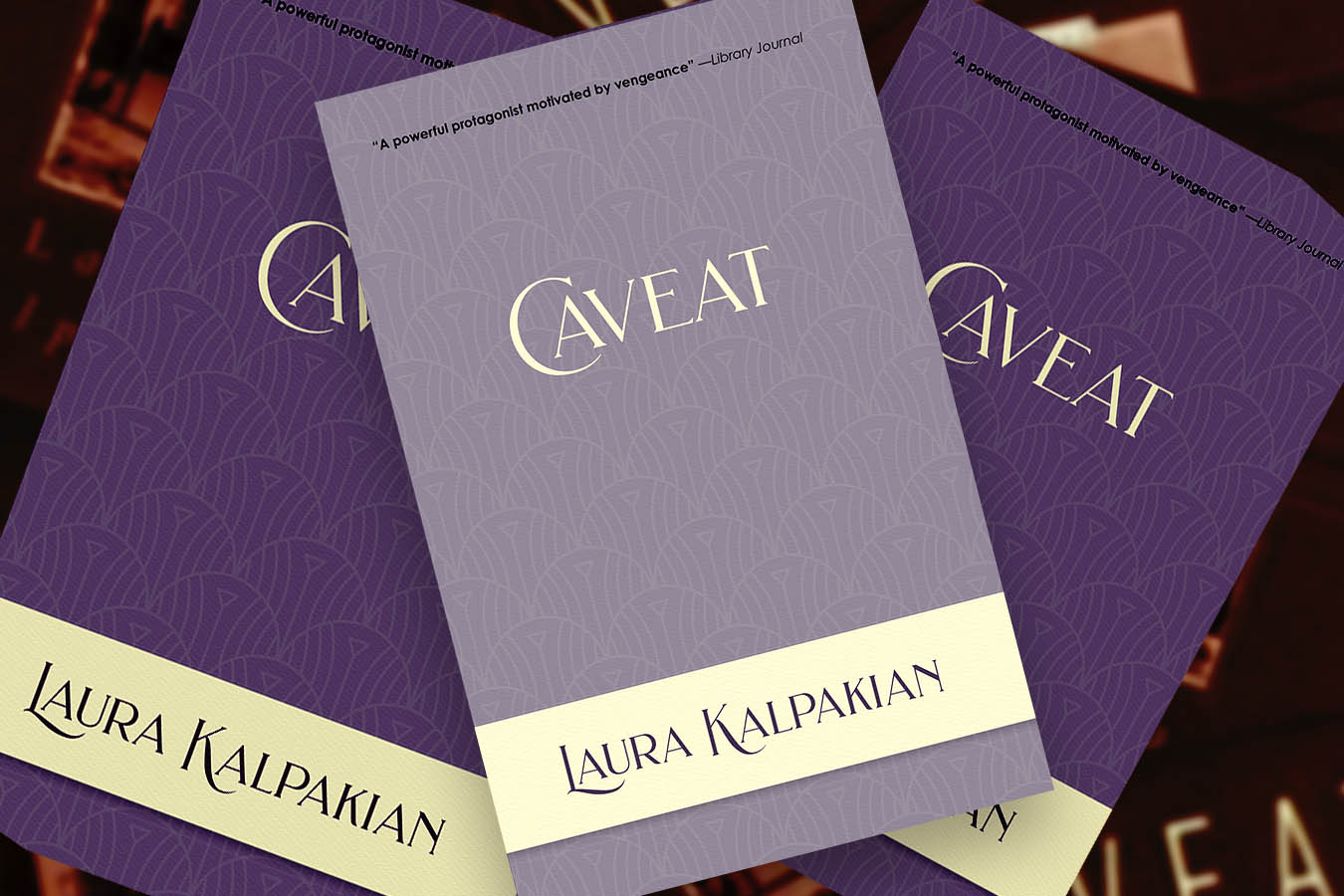 Most of my novels remind me of a bag full of mewling cats. Noisy characters preen, elbowing others out of the way, assorted backstories threaten to overwhelm, insistent themes shove their way to the fore. But Caveat (and one other book) are so tightly woven, the narrative so thematically coherent that you could slide a butterknife into the prose and it would come out clean. Everything is in place. It took me eighteen years.

The possibilities leapt to mind when I read a little article in the Los Angeles Times in 1980 about a flood in 1916, occasioned by rainmaker; the city refused to pay his fee unless he accepted responsibility for the damages the flood had wrought. St. Elmo, California, (which I had created) was fertile ground for a tale of drought, rain, revenge and greed.

The novel still felt like a mirage, just beyond my artistic reach. I quit again.

I saved the little article in my wallet till it disintegrated. I didn’t write anything even though the opening scene was always clear to me. Finally in 1983 I pounded out some fifty pages, then quit. My domestic life was such that I could not concentrate on something so demanding.  After moving to Washington, I returned to the book. In those fifty I had established a place and time, (autumn 1916 while the long inconclusive bloodbath of the Great War raged in Europe.) I had the major characters: Hank Beecham, the rainmaker, Jeremiah Beecham, his drunken, demented father, Eulalie Beecham, Hank’s long-suffering mother, Miss Emmons, the schoolteacher who married him. Also, Dr. Lucius Tipton had his role; I already knew Lucius from These Latter Days. Caveat grew to a hundred pages, but it still felt like a mirage, just beyond my artistic reach. I quit again.

Years passed, and in that time I did extensive, if erratic research. The LA Times article had mentioned that the rainmaker got his ideas on how to make the heavens open up from listening to Civil War stories of his father who maintained that rain followed every battle. I thrashed around in a lot of random reading about meteorology and gunpowder and battles, and my research bore this premise out.

I felt as though that book had somehow found me, rather than me finding it.

As a result, Jeremiah Beecham, ex-Confederate, failed rancher, brutal drunk, began to emerge more clearly in my imagination. But the Civil War was too broad a canvas. Fiction only thrives on the particular. I narrowed Jeremiah’s experience to Shiloh as the battle that had shaped him indelibly. (He lived and fought through to the end, the South’s defeat, after which he came to California to homestead, a ranch he called Shiloh.) I deepened my reading about the battle, the armies, the tactics, the commanders, the music, what the troops ate and wore and suffered. As I was writing the very last drafts of Caveat, I went to the Bellingham Public Library and stumbled on The Story of a Common Soldier by Leander Stillwell, a private in the 61st Indiana Infantry writing in 1916 of his experience at Shiloh. I felt as though that book had somehow found me, rather than me finding it. I used his words for an epigram.

The word Shiloh means “place of peace” in the bible, a cruel irony, given what happened that April of 1862. At the end of fighting that first day, the Confederates had routed the Union troops. By the end of fighting the next day, the re-enforced Union troops were victorious. The only certainty to emerge from the battle of Shiloh was the knowledge—on both sides—that the war would be long and bitter and hard fought.

The city fathers make him a bet; Hank accepts with one caveat.

With this new, much deeper context I was able to make Jeremiah’s rants all the more specific and terrifying. Hank, though much abused as a boy, eventually pulled from his father’s harangues crucial insights into the atmospheric conditions that arise with gunpowder and smoke. At seventeen Hank took his mother, left Shiloh, and moved into town where he opened a sewing machine repair shop. A young man of native but untutored genius, nights Hank read, weekends he experimented. When Eulalie died of cancer Hank left St. Elmo, and went on to earn success as a rainmaker all over the arid West. In the opening scene of Caveat Hank returns to St. Elmo some twenty years later when the city fathers request his expertise to save them and the town from a killing drought. The city fathers make him a bet: fill the reservoir (so dry it’s cracked) and they will pay Hank Beecham an astronomical $50,000. Fill it not, and they will owe him nothing. Hank accepts with one caveat.

The novel moves between a third-person narrator, and Dr. Lucius Tipton in the first-person. Dr. Tipton is the only person in St. Elmo for whom Hank Beecham has a morsel of respect. The ingredients I mention for Hank’s formulas are probably correct, but I’m no chemist, and the book could only describe the effects of these formulas. That was Dr. Tipton’s narrative task to begin with. As the book grew, his role broadened beyond mere bystander.

When I returned to the novel Hank’s character had changed—and so had his fate.

Slowly, over a few years, these various elements—structural, historical, thematic—coalesced. By the time I returned to work on Caveat, Hank’s character had changed—and so had his fate. Miss Emmons had changed, and far from being a wisp in Hank’s past, she became a powerful force in the novel. Even Eulalie Beecham had changed. Only Jeremiah remained the same ugly, cruel person he always had been.

I knew that I stood where the young Leander Stillwell had stood.

In the fall of 1998, eighteen years after I cut that newspaper clipping, Caveat was published by John F. Blair, Publishers, a small independent in North Carolina. I found this publisher through Memphis friends, writers I had met through my novel, Graced Land. That fall my Memphis friends and I drove out to Shiloh, now a national military park. We went via the back way, the entrance nearest the Tennessee River. We walked all around, but at a certain place, I stopped abruptly and swallowed hard, fighting tears as I remembered Leander Stillwell’s descriptions. I knew that I stood where he had stood. The terror and confusion of the battle rose before my eyes, and for the first time in eighteen years I felt pity for Jeremiah Beecham who, like Leander Stillwell, was little more than a boy when he went to fight.

Today April 5th, 2022, I’m proud and delighted that Caveat has been reissued in a uniform trade paperback by Paint Creek Press. But I also think it ironically fitting that April 5th was the Eve of the Battle of Shiloh. On April 6th and 7th 1862 that battle raged, inflicting suffering beyond anyone’s imagination, then or now. Despite the one hundred and sixty years between us and Shiloh, Leander Stillwell’s poignant description still rings with sadness. His unit had come down the river on the night of the 6th to re-enforce the battered Union Army. The atmospheric conditions had already created rain.

Rain set in about dark….I made a sort of pillow of my gun, cartridge box, haversack and canteen and stretched myself out on the brush pile, tired to death. . . And the rain drizzled down while every fifteen minutes from the river one of the big guns roared and sent a ponderous shell shrieking into the ravine in the direction of the enemy. To this day, whenever I hear an instrumental band playing “The Girl I left Behind Me,” there comes to me the memory of that gloomy Sunday night at Shiloh. I hear again the ceaseless patter of the rain, the dull heavy tread of the marching columns, the thunderous roar of the navy guns, the demoniacal scream of the projectile and mingled with it all is the sweet plaintive music of that old song.