I have slept in Elvis’s bedroom. Not too many people can say, can they? 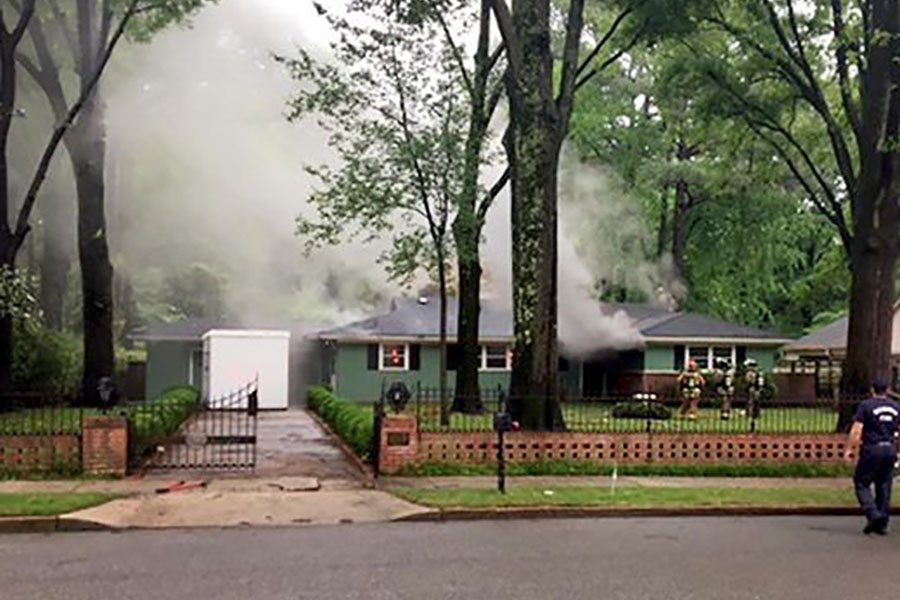 When I slept there, no ghosts rapped, though I hoped the wallpaper would ripple.

The publication of Graced Land opened my life up to friends, experience and opportunities I could never have guessed at. Grove Press sent me on a book tour that included Memphis, a city I had never seen. At one of the bookstore readings a couple came up to me, Cindy Hazen and Mike Freeman. That very same month, May, 1992, they had published The Best of Elvis, a book detailing the King’s generosity, a theme deeply resonant in Graced Land. I’ve always felt that Elvis himself must have nudged the universe to bring us together. Both books celebrated Elvis for more than just his music. Cindy and Mike said they’d like to show me some of Memphis, Elvis style, but they had a family barbecue that Saturday night. Happily the barbecue was cancelled, and what followed was for me a truly memorable night on Beale Street.  Live music, dancing, meeting the early rock legend, Rufus Thomas, and an array of Elvis’s best friends, including members of the Memphis Mafia who had known Elvis since high school. They were all eager to read my book.

Of course I went to Graceland on that visit, but I found it a manicured museum and the tour, led by a lady with a soothing accent, uninspiring. More interesting  than Graceland was 1034 Audubon Drive. Cindy and Mike drove me past this modest ranch-style house with four bedrooms, two baths, a two car garage, low fence and a broad front lawn. Elvis had bought this house with the first flush of his new money in 1956, the year his life would change forever. (Beautifully documented in the film, Elvis ‘56 which can be found on YouTube.) You could just imagine the family’s happiness here, affluent for the first time in their entire lives, at the crest of a wave that would recognize and reward Elvis’s talents.

One can only imagine the neighbors’ chagrin and the Presleys’ desperation for privacy.

When Elvis and his parents moved there, Audubon Drive—and its prosperous but not splashy neighborhood—were suddenly splashed all over national magazines, descended upon by photographers and mobbed with fans, teenagers who parked their cars, got out, roamed around. The police were often called to control the crowds. One can only imagine the neighbors’ chagrin and the Presleys’ desperation for privacy. Elvis put in a swimming pool and a game room. I have a fan club card, a 1956 photograph of a bunch of girls sitting around the Audubon pool, to bask in Elvis’s presence as much as the sunshine. The pool was only ever half-filled because (the story goes) Gladys was afraid of Elvis drowning. I also remember reading that Gladys had some chickens and they too disturbed the neighbors. After only thirteen months at Audubon, Elvis, Gladys and Vernon left, moved to Graceland to live behind the famous gates for the rest of their lives—and where they are now buried in the memorial garden. In 1998, Cindy and Mike learned that 1034 Audubon Drive house was about to go on sale. They made an offer that was accepted. I happened to be in Memphis then, touring with my novel Caveat. Cindy and I went together for a first look inside the house.

The current occupants were into taxidermy, stuffed animals everywhere and a strange odor.

Nothing structurally had been done to it since the Presleys left. However, the current occupants were into taxidermy and there were all sorts of stuffed animals with glassy eyes on the walls and shelves, including their pet Pomeranian. The place had (as you might well imagine) a strange odor. We left suppressing shudders, and with a better idea of the work that lay ahead for Cindy and Mike who were committed to restoring Audubon to its 1956 Elvis Glory. To recreate authentically they scanned hundreds of photographs, especially the famous Alfred Wertheimer photos of the family. They spoke with Elvis’s friends from that era who remembered the house. They gently scraped away the accretions of wallpaper down to the layer that matched the Wertheimer photos. They scoured flea markets and antique stores, thrift shops and estate sales. They put out word locally and abroad of what they were looking for, and people contacted them. They bought dishes and kitchen items that would have been in use when Gladys cooked there. The swimming pool had gone to ruin and that had to be restored as well. One thing not from the Fifties that graced the Audubon bookshelves was a copy of Graced Land. This made me very happy. Occasionally small groups, mostly European fan clubs, came to 1034 Audubon, and Cindy and Mike showed them around. But for the most part the house was always a work-in- progress while the couple lived there, diligently restoring it. They had their own lives as well. In 1997 John F. Blair published their book, Memphis, Elvis-Style allied to Mike’s tour bus business taking fans to Memphis sites associated with the King. They were also working on a new book annotating a trove of Patsy Cline’s letters they had bought at auction. (Love Always, Patsy: Patsy Cline’s Letters to a Friend, Berkley Books, 1999.)

I slept in Elvis’s original bedroom that faced the street.

I visited Memphis again in the early 2000s. By now Cindy and Mike had painstakingly given Audubon a 1956 vibe, complete with décor and musical motifs. I experienced strange twinges of déjà-vu to see myself in settings I vividly remembered from the Wertheimer photographs. I slept in Elvis’s bedroom that faced the street. That was his original bedroom, but later Gladys and Vernon gave their son the master suite at the back of the house so that he could get some rest. They slept in the front bedroom. (You have to wonder if teenage girls were still rapping at the windows disturbing Gladys and Vernon.) When I stayed there, no girls or ghosts or anyone rapped at the windows, though I kept hoping to see a ripple in the wallpaper, or to hear the twang of a lonely guitar.

Reverend Al was shouting, and we were all on our feet and I was crying.

On that visit Cindy and Mike took me to a Sunday service at the Full Gospel Tabernacle Church, Al Green’s church. Every touring musician who can stopover in Memphis on a Sunday will play in Al Green’s church. The music was spectacular. Great, rousing opening acts stirred the congregation before Reverend Al emerged. Clearly there were regular churchgoers present, and lots of visitors as well, and the congregation jumped and shouted, all of us. Deacons passed the hat many times throughout the service and people were happy to throw their money in.

When trouble descends on my life, “I’m still here” is a mantra I return to time and again.

Perhaps predictably shit got weird after that.

The demands of restoration, the responsibility of creating not just a home, but a tribute  worthy of a legend, all that took its eventual toll. In 2006 Cindy and Mike divorced and the house was sold in an astonishing eBay auction in which the “spoonbender” magician Uri Geller was said to have placed the winning bid. Perhaps predictably shit got weird after that, resulting in a lawsuit that is still taught in law schools. The final buyer was Mike Curb, a record executive who paid a reported one million dollars. The house was added to the National Registry of Historic Places just before the sale. Mr. Curb entrusted Audubon to the Mike Curb Institute for Music at Rhodes College in Memphis. They filled in the pool. The house was only used for occasional small recitals or recording sessions. Students sometimes disrespected the property throwing beer bottles on the lawn.

Fire and flood? Sounds almost biblical to me. 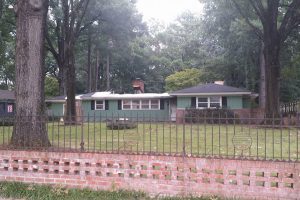 Damage after the fire.

In the winter of 2017 the Audubon house was badly damaged by burst pipes flooding the rooms, followed by a fire. Fire and flood? Sounds almost biblical to me. Since then 1034 Audubon Drive sits unrepaired, unused, sad, scarred, dark and empty. The grass is mowed, the yard tended to by groundskeepers. The neighborhood is quiet. Any ghosts uneasy with the shiny glitz and ersatz glam of the Graceland corporate complex are no doubt welcomed at Audubon. It’s almost as the house is quietly saying, “I’m still here.”